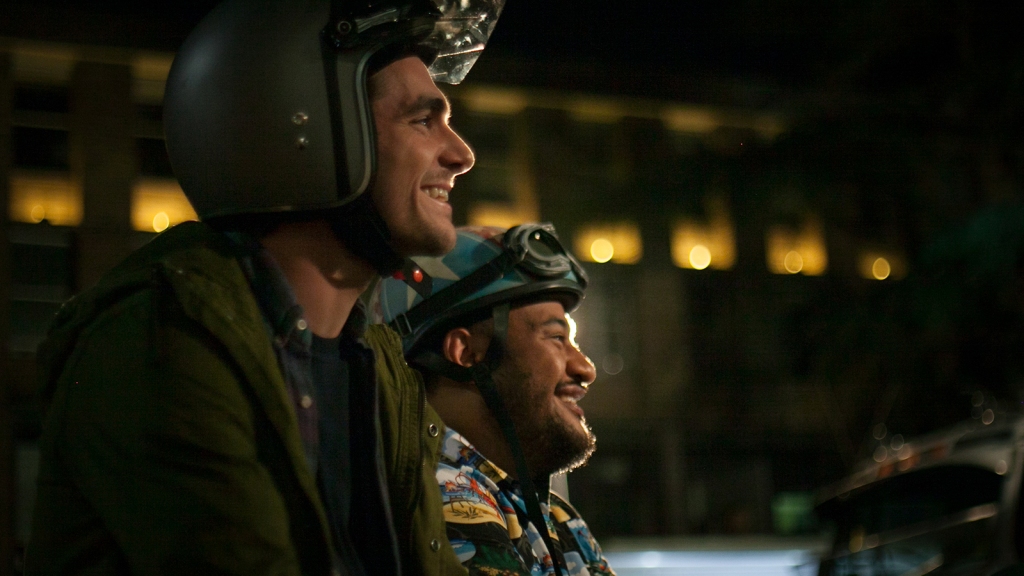 Everyone involved in this movie wants you to like it, so, so much.

There’s nothing wrong with liking movies; where would cinephiles be if we didn’t. Yet none too sparingly a flick comes along never so concerned with its dramatic conceptions than it’s more earnest bona fides here abounding.

In fairness, we all need and love ‘feel good’ movies. Standing Up For Sonny, if notable in some respects, dutifully files into the form’s beaming pantheon.

Travis (RJ Mitte), a maintenance worker at a local school, spends his spare time in the local pub and comedy joint (Surry Hills’ Hollywood Hotel and Café Lounge). When Travis stands up for the titular Sonny (Philippa Northeast) when she is heckled at a gig, soon Sonny’s boyfriend and stock-standard lousy dude-bro/radio personality Mikey (Sam Reid) hires him to help refine her material, as Travis too sets his sights on the comedy stage.

Not trying too greatly to be anything too far beyond predictable, Standing Up For Sonny is a strange one in terms of it’s plotting. A fusion of thirties Fred Astaire/fifties Elvis movies where the guy ends up in all manners of happenstances to get the girl with 2000’s meet cute aesthetics, the film even lingers for a while on a cast-wide rendition of Catch My Disease, acoustics and ukuleles intact.

Something that would have already been on the nose ten years ago, someone should have intervened here.

What does stand out regardless, save the inner-Sydney settings of which the film makes excellent use, is the treatment of disability as reflected in the main characters. Travis, who has cerebral palsy, is front and centre for several confronting sequences highlighting how those in his position can routinely be mistreated. Mitte, carrying much of the film, deserves a lot of credit for the extent to which Travis’ travails are so emotionally resonant. His stand up bits are also very funny even if his character uses the opportunity to state the moral of the story.

Moreover, the decision to depict Travis as a duly complex and not wholly sympathetic character buoys the movie. A singularly dimensional approach to a figure in his particular circumstances is not unlikely in cinema given any filmmaker would fairly want to avoid criticism of creating a negative depiction or perception of a disabled person or persons. A simplistic approach to Travis would have been boring yet in that less than endearing about him we are treated to the film’s best drama as he and those around Travis have to comprehend the ramifications of his actions. Importantly, the film also drives the point home, absent from many other depictions of disability, that persons with disabilities are just like everyone else and to the particular dynamics of this film like each and everyone else they can just as well be jerks.

Home and Away’s Northeast is very good in her first feature role, though Italia Hunt is by far the most memorable as Travis’ vision impaired roommate Gordo and the best mate you’ll always want to have if you ever find yourself in a romcom like this one.

For our interview with RJ Mitte see here

Standing Up For Sonny on Film Fight Club

Leave a Reply to Standing Up For Sonny | Festevez Cancel reply

Follow FalkenScreen on WordPress.com
If Bad Boys DOES become Fast and the Furious (review up soon) we'll make ourselves available for the Tokyo Drift style spin-off #badboysforlife #badboys #badboys3
Still outstanding, and I'm feeling like a little kid #eltonjohn #eltonjohnfarewelltour
Pretty much sums up my @kinosydney weekend - so looking forward to seeing what everyone's come up with! #KinoKabaret #KinoSydney #KinoSydney145 #Kino @sunstudios
Was a wild ride @sufffilmfest @factory_theatre - really special to see 'Bumbling' up on the big screen with the amazing crew & cast (short will be up soon!), host a lively Q&A with Angus and Heath; two of the minds behind #Locusts (in cinemas Oct 17) and just have a spectacular weekend of cinema you don't see anywhere else - well done to all the #Take48 winners, finalists and the #SUFF2019 team on a job spectacularly done #suff #sydneyundergroundfilmfestival #sydneyundergroundfilmfestival2019 #undergroundfilm #undergroundfilmsydney #francesferguson #alicemovie #alicefilm #filmfestivals #sydneyfilmfestivals #australianfilmfestivals
We travelled into the future for our chat with @scififilmfestival's @screen_space airing tonight; we can tell you that by Wednesday evening plaintive monoliths will have appeared everywhere and gremlins will have re-asserted their dominance while in spite of it all #Scififilmfestival will still rock on #scifi #scifimovies #scififilm #scififilms
Had a lot of fun this weekend running around Sydney for the @sufffilmfest TAKE48 challenge with a great crew - looking forward to seeing all the flicks and what downright weird wacky and wonderful everyone came up with! #SUFF2019 #SUFF #Sydneyundergroundfilmfestival #sydneyundergroundfilmfestival2019 #undergroundfilm #undergroundcinema #sydneycinema #shortfilmmaking #shortfilm #filmmaking #filmmakers #sydneyfilmmakers #filmfestivals #sydneyfilmfestivals #australianfilmfestivals
Took a hop skip jump to Taiwan last night - think I’ll spend the weekend here @taiwanfilmfest #TaiwanFilmFest #TaiwanFilmFestival #taiwancinema #taiwanesecinema #taiwanfilm #taiwanesefilm
Done Wario Stadium, Bowser’s Castle & Yoshi Valley - next up, Rainbow Road #gokarting #gokarts #gokartracing #gokart