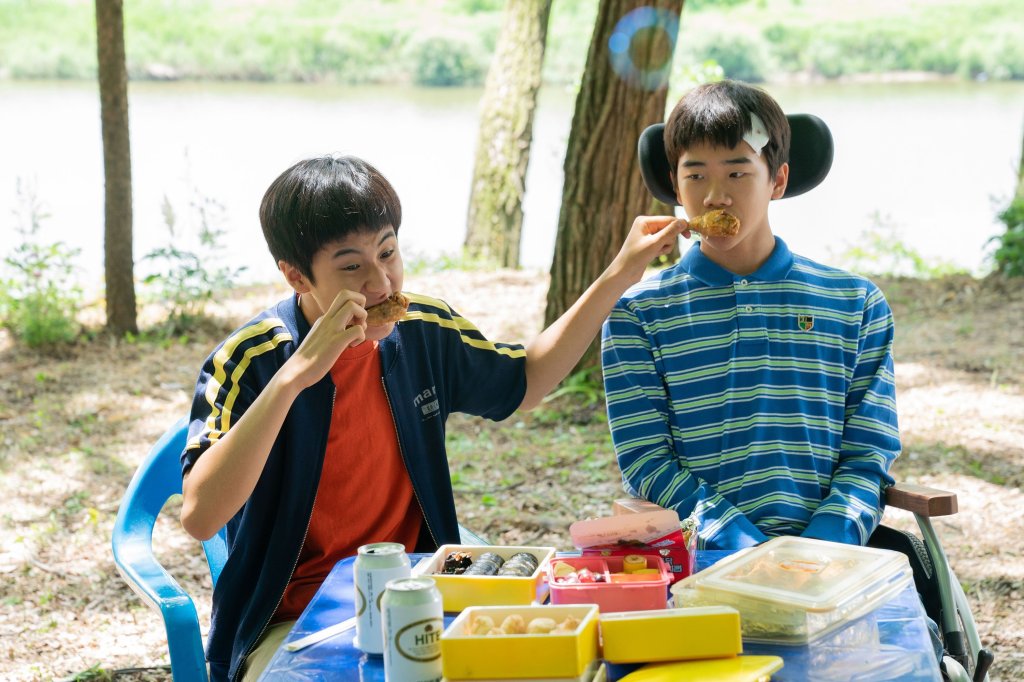 A burgeoning cinematic focus on disability would not be complete without venturing into the funny.

Typically the realm of drama, comedies of late have started to mine the potential inherent in so many stories that but for studios being circumspect would have seen the light of day. This latest explores the 20-year relationship between two adult men, together Se-ha (Shin Ha-kyun), a fast-talking, qualified social worker unable to walk or move from the neck down, and Dong-goo (Lee Kwang-soo); athletic yet with the mental age of a five year old.

Relying on each other to no small end since their formative years in a care centre for children, their living situation is upended when someone arrives claiming to be the mother of one of the companions.

The going-about of their daily routines far from the most humorously staged set pieces, Inseparable Bros hits its stride when the pair frantically (and morbidly) attempt to ensure Dong-goo’s entry into a swimming competition. The resulting scene, with a frenetic, darkly comic emphasis on the pair’s states, is not just uproarious for being so well executed but simply for it’s fearless like being such a novelty in cinema.

Best for the duo’s chemistry, the film too bears a memorable escapade with Se-ha careening solo down a freeway which, if almost statedly symbolic, emerged an uplifting and genuinely tension-inducing sequence. The inclusion of the swimming scenes, the metaphor within being even more patently obvious, remained too very moving.

Experiencing some issues with pacing, we could just as well have spent greater time with the pair as children; the film boasting a talented young actor in Se-ha’s role before proceedings launch quickly into a greatly extended second act. The third act too teases more than a few conclusive scenes and ending notes which the film could just as easily have rested on before it actually wrapped up.

Additionally sporting a late ‘twist,’ this inclusion, had it been featured much earlier in the run, would have permitted us that much more essential time to reckon with it’s great significance rather than the very few minutes we got. Such a placement would too have proffered the relationship between the pair that much more emotional resonance throughout; it’s insertion at such a late stage, if revelatory in terms of traditional drama and the events herein, conversely imparting little that we could not already garner from having spent nearly two hours with these characters.

A fine flick regardless, far and above so for it’s well cast leads, Inseparable Bros is a more than welcome addition to the pantheon of comedy for bearing forms of humour regretfully all too lacking from cinema.