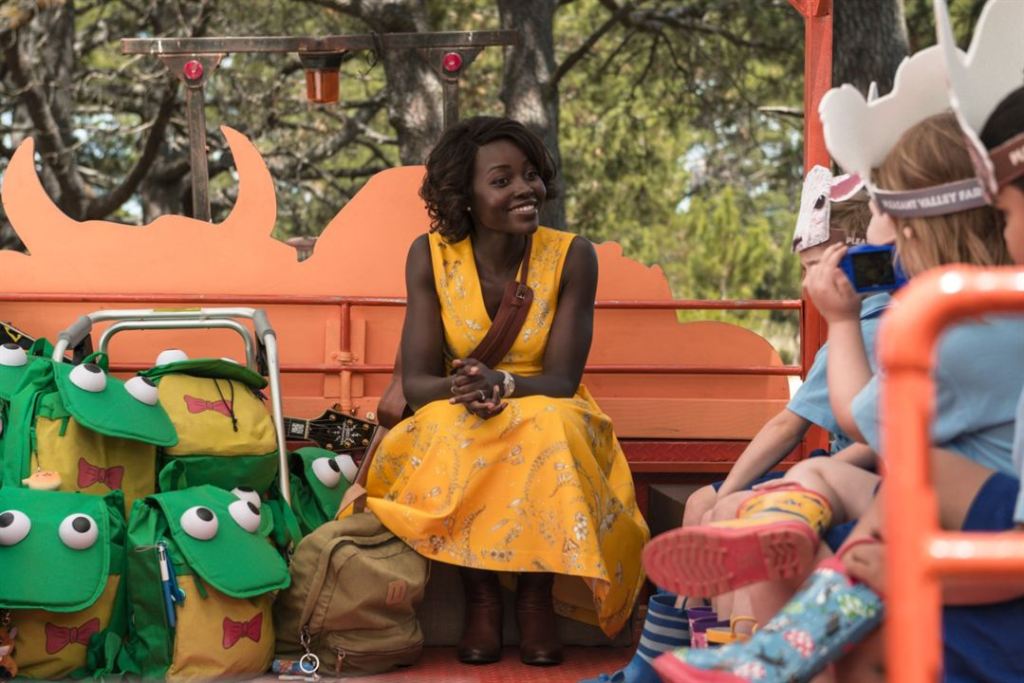 It’s a strange thing to say that something is deceptively good.

No film is trying to trick you that it is anything but accomplished, but the term still gets bandied about. What it actually imputes is that the style of the art doesn’t suggest the bona fides of the form nor notable level of skill with which it is evinced. By this metric, Little Monsters is deceptively brilliant.

Dave (Alexander England), living on his sister’s couch, on taking his nephew to school immediately falls for his kindergarten teacher Miss Caroline (Lupita Nyong’o). Looking to endear himself by accompanying his ukulele-bearing crush and the little ones on a field trip, there is of course a mass zombie breakout from the nearby US Military base.

What is such a conspicuous US base doing in this very populated area of Australia? We’re not sure, and neither is anyone in this movie.

It’s at this register that Little Monsters operates and for a monster flick, given a light-heartedly exaggerated one, it has the rare dramatic integrity to not depart, even in the most action-orientated sequences, from the level of believability and internal logic it quickly establishes. Too tempering itself with a lightly ironic tone, but for one very blatant comment about the zombies not looking real the very distinct, detached wavelength on which this is operating never overwhelms proceedings with any overly obvious winks. Permitting several excellent throwaway lines (one soldier asking whether this batch are slow or fast-moving zombies being a highlight), the gags are welcomely novel with the filmmakers thankfully nay feeling the need to grind proceedings to a halt to make sure we get the bit.

In this regard, there’s also a blink and you’ll miss it connection between the two central leads revealed casually in a late night conversation; a piece of superb, rewarding subtly rarely seen in like fare.

Uncommonly tight in it’s storytelling, a great deal happens in very short expanses of time. There are coy setups that do well to pay off later and, in what might seem like an eyeroll-worthy attempt to cash in on recently resurgent Star Wars mania, the film actually finds novel ways to deploy the symbolism and all that we’ve come to know from a galaxy far, far away; including one exceptionally staged and shot sequence as a masked figure makes a run for it.

On this character, recent cinema has courted some controversy for reportedly irresponsible on-screen treatment of serious allergic reactions, a matter rarely imparted adequately in film to boot. Little Monsters, choosing to depict such a reaction, respectfully does so faithfully and with bare embellishment. Shying away from comedy and opportunities for gratuitous laughs at this instance, it too renders the moment memorably dramatic absent using it exploitatively as a basis for greatly extraneous action. For this author, who had to a carry around an epinephrine at a young age in anticipation of such a circumstance (save the zombies, naturally), it’s a rare relief to see the subject depicted sensitively on screen and more so amidst such entertaining carnage.

Nyong’o emerges first and foremost among the cast, pivoting exceptionally and with evident joy between the action and the film’s finest delivery of several stand-out one-liners. Nearly matched by Josh Gad as world-famous and predictably cynical children’s entertainer Teddy McGiggle, he is likewise here living his best life. England, no match for the screen presence of his co-stars, still manages to sell the good-natured if ill-equipped Dave.

Too featuring a special treat for Taylor Swift fans, the best monster movie that Lupita Nyong’o was in this year and one of the finest recent offerings of Australian cinema shouldn’t fly under the radar for long.