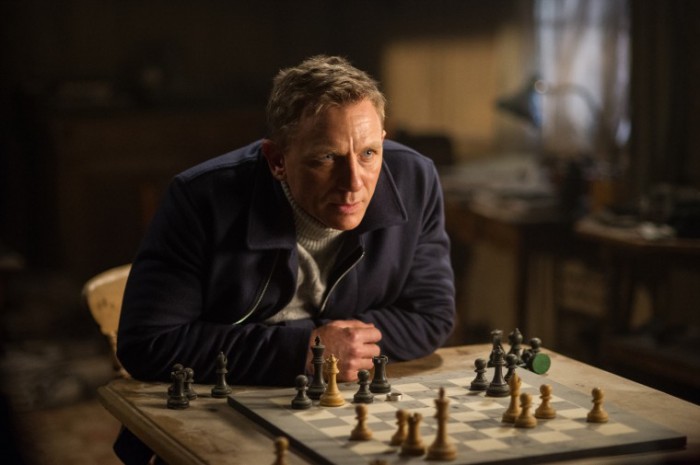 ‘Spectre’ is aptly named – not for the criminal empire that plagued Bond’s early adventures, but for its two-syllable summary of why the super-spy’s 24th outing is one of his best.

Haunted by the dead and laced with imagery from many previous films; Spectre is a vision of Bond’s past, a treat for fans, more loyal to the series’ traditional style and structure than any of Craig’s other entries and an awe-inspiring yet still markedly original allusion that exists unmistakeably in the present day.

Spectre is the first of Craig’s films to feature almost all of the series’ hallmarks; M, Q and Moneypenny are in tow from the beginning, there’s a car, a gadget-laden watch, a sadistic henchman, a supervillain, a super-lair, the film opens with the gun barrel sequence and Bond drinks a watered-down martini.

While repetitive, the series’ tropes have never leant themselves to predictability; the suspense in Bond films has always oozed from the question of just what he’s going to do to outsmart the bad guy and save the day. Criticisms levelled at Spectre and the series generally have always focused on Bond following a formula or being predictable.

Well of course it’s bloody predictable, it’s a James Bond film. This one is even called Spectre, removing what could have been a lax reveal and creating months of anticipation for fans eager for the return of the evil conglomerate. We know what it’s all about and we know what’s going to happen. Even the early trailer footage featured star Christoph Waltz serenely settled in the more than familiar collar and mega-base; all that was missing was the cat.

There’s no question that Bond’s going to survive, the only issue is just how he’s going to get the girl and deliver hammy one-liners without breaking a sweat. Producers Albert R. ‘Cubby’ Broccoli and Harry Saltzman established decades ago that this man is going nowhere and will get out of anything limbs intact, and once you accept this the thrill comes from the series’ spectacular stunts and escape sequences that are in no short supply in Spectre.

James Bond movies are like an explosion, the largest one ever featured on-screen incidentally taking place towards the end of Spectre. The films are loud, familiar and have fairly recognisable features, though each one is distinctly sensational and you can’t look away.

The series has drawn strength from its formula and familiarity, making it the longest running and highest grossing of all time when adjusted for inflation, ably adaptable to different times and trends and it is these classic allusions with a very modern sheen that make Spectre great.

The stand-alone pre-titles sequence, featuring a helicopter doing barrel rolls and any number of mid-air stunts, itself an allusion to the opening from For Your Eyes Only, follows in the best tradition of the series’ stunt-work and is unfortunately let down by its succeeding title song “Writing’s on the Wall,”the weakest element of the film. Despite the regrettable number, the title sequence itself is replete with the series’ classic silhouettes, oddly-placed guns and slow-motion bullets while boasting the modern films’ tradition of teasing out the story for the observant viewer.

From there the action sequences pile up and pretty girls come and go, and anyone who grew up with Sean Connery or Roger Moore will actually feel like they’re watching a James Bond film. After some traditionally fleeting yet heated romances, Bond encounters Madeleine Swann, played by Lea Seydoux rocking a sideways-glance to rival Diana Rigg. Her name being one of the series’ more elusive double-entendres, Swann’s moniker is drawn from Marcel Proust’s The Way by Swann’s where a character remembers his past after he eats a cake called Madeleine.

The discernible tropes are thrillingly apparent – Q visits Bond in the field, there’s the near-obligatory train-fight, Bond pays little regard to the beautiful scenery around him and at one point the characters visit a safe-house called Hildebrand, a sly reference to The Hildebrand Rarity, one of the last Fleming titles not to be adapted into a film.

All this takes place in the present day with very modern themes explored to some extent in Skyfall; the perils of all-encompassing surveillance, global terrorism and the moral dimensions of drone warfare.

More than that, the classical allusions to the series, old and new, will have fans drooling. Villains sit at a giant table all too similar to Thunderball’s and reel off their evil misdeeds. A crater-lair joyously reminiscent of You Only Live Twice hosts more computer terminals than Drax’s digs in Moonraker. M accuses Bond of creating an ‘international incident,’ our hero dons a white tux and red carnation, the villain conveniently explains everything, the ejector seat makes a showing and a conversation between Bond and Swann mirrors an earlier exchange from Goldeneye whose three-minute timer also makes an eerie appearance.

Perhaps best of all, the mountain clinic where Bond meets Swann will be readily familiar to fans of On Her Majesty’s Secret Service, supplying the setting for one of Spectre’s best chase scenes.

Goldfinger’s Pussy Galore gets an honourable mention, an exchange between M and a rival mimics Craig’s very first scene in Casino Royale and as with You Only Live Twice, Spectre has the joy of tying several divergent story strands together. A joy for die-hards to pick out, Spectre neither relies on its allusions for effect nor lets them overwhelm the film, inserting them sumptuously and subtly into the action; allowing wholly original sequences and characters, including Mi5 head C (Sherlock’s Andrew Scott) to drive the film.

The major criticism to be made of Spectre is that this is now the third film in a row where Bond has expressly gone rogue from MI6. An unnecessary recurrence where each of Bond’s outings manages to hold MI6’s fortunes in the balance, this is something distinctly out of kilter with its predecessors. With Skyfall’s ending hinting at a return to the traditional format there’s no reason Spectre’s successors can’t or won’t follow suit.

A consummate addition to the James Bond canon of films, Spectre is just that, and unlike a few iterations a very Bond James Bond film that will delight series tragics. Neither Spectre nor any of the Bond entries can be classed or rated as an action film; Bond is its own distinct genre and it is against these standards that Spectre excels.