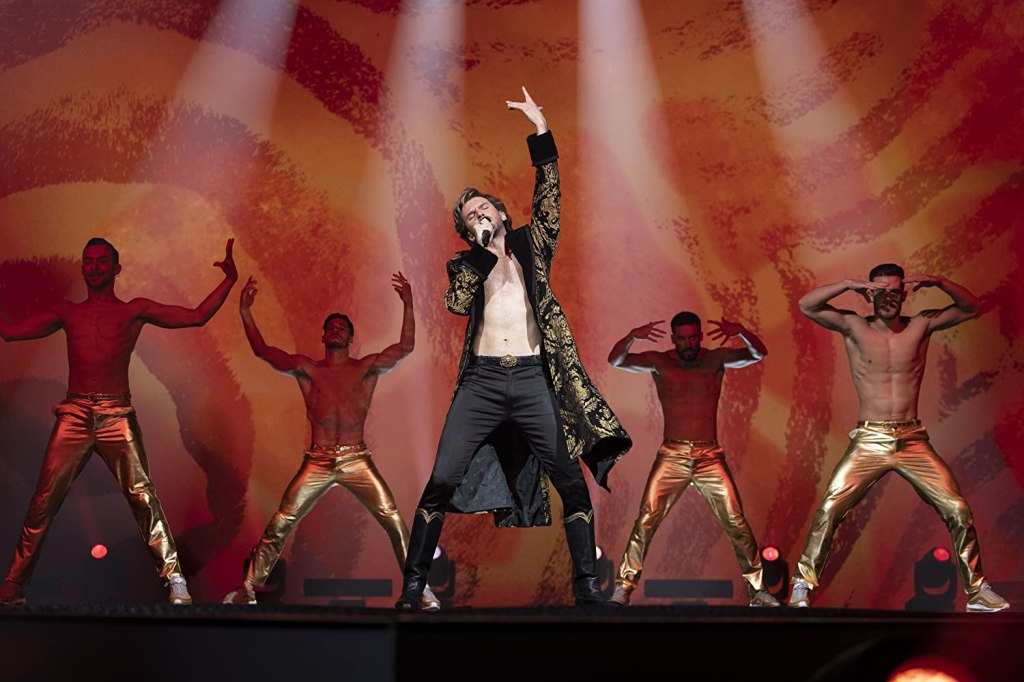 The European ‘Song’ Contest, to which this film for many will serve as introduction, neither sits at any apex of cultural achievement nor the ironic bulwarks of saccharine kitsch to which many entrants aspire. Rather, amidst its longevity and oddly unique role in cross-border co-operation, the competition, to which Australia is specially beholden, marks its own measures of success and brands of cultural height.

Tied not necessarily to any independent form, skill or recognisable ingenuity, appeal relies on brazenness, melding of styles and a nakedly single-minded, utterly shameless pursuit of shock-filled fun. To this end, it’s amazing Will Ferrell and Adam McKay haven’t mined these depths already.

Reportedly a huge fan of the show, Ferrell, committing as always, is regretfully on auto-pilot for whole lengths, drawing on the manner and storylines of his underrated Blades of Glory and early success Zoolander as regards the relationship between his Lars and the characters’ “extremely handsome father;” Pierce Brosnan having some fun with comedy for a change.

The story is of the broadest if heart-warmingly familial strokes elevated by its novel focus on the tournament; anyone who’s seen more than one Ferrell comedy (Old School fans should recognise one of the gags) will be across these stylings; complete with a Blades-esque MacGuffin in the form of an unreachable note. We’re all familiar with the follow your dreams against all opposition arc and even if it can get tired it doesn’t get old.

With Ferrell persistently glaring at the camera ala his Mustafa and reminding everyone that he’s here to make them laugh, McAdams, unsurprisingly, is best in show. Her reactions to a pro forma troupe of yet unseen backup dancers invading her solo and her negotiations with a group of elves, yes elves; pure gold. Viewers seem to be constantly finding out that the severely underappreciated comic performer can put in turn after turn like this and unlike Ferrell nails the balance of earnestness, knowing self-seriousness and tactless flamboyance central to Eurovision’s greatest hits.

There’s a caveat that has to be given before anyone watches this movie and that is you are only going to enjoy this if you are moderately familiar with and endeared by Eurovision. The film does not serve as a primer for the uninitiated absent proper grounding in the dynamics of the competition and those unbeholden to its unique stylings will likely feel as unimpressed by Ferrell’s tonally similar antics.

For those most dedicated decades-long Eurovision fans who wake up at 5am every year to watch every Semi-Final live, this author among them, you will get many a high off of this and more so for our having sadly missed the contest in its traditional form this May past. To the filmmakers’ great credit, they picked Iceland as the focus and amidst many playful digs at the nation, the treatment of the Icelandic Government being a highlight, managed to nail the effective winners of this year’s non-tournament.

And it would not be a Eurovision movie without being (in respects) avowedly self-referential, with the film taking some time out of proceedings to address that this is in no small part a group of North Americans behind and in front of the camera. Taking the mickey via another appropriately parodic band of US tourists who have only just landed in town, it’s some of the tightest scripting therein as every line hits the mark. Itself landing on Netflix, Fire Saga is probably best served by a platform where the most well-attuned fans can discover this and return for repeat viewings at their leisure and as they might otherwise have tuned into the annual tradition.

The varied numbers (and song titles) which form the lead-up to and actual competition are successes not just for their catchiness and necessary originality but for effectively satirising one of the hardest things to mock and exaggerating that which barely bears exaggeration; generating in the process what would typically be Eurovision bangers in any given year. Graciously recognising that Belarus are invariably stand-outs, there’s a classy Lordi reference alongside years-old highlights and fair acknowledgement of the pivotal (if often biased) roles respective countries’ commentators play. The hark-backs to classic Eurovision numbers will have any fan beaming and the elapsing of the first Semi-Final, encompassing one of the great Eurovision props, is uproarious while speaking to the extremely sincere ethos of the entire escapade.

The blocking of the stage performances, akin to how the broadcasts are typically handled, are too coyly deferential and situate us amongst this extravagance better than a more highly stylised or numerous camera setup which would have likely faltered.

Stars of past, clearly having the time of their lives in this reunion, welcomely make appearances, among them Alexander Rybak (“trust us, bring a violin”), though the best and most welcome surprise comes from a winner of recent years lovingly reciting one of Eurovision’s very best numbers on Edinburgh’s streets.

On this, there are varyingly hilarious interpretations as to why the competition was set in Edinburgh. It could be acknowledging that the British are least likely to win this and if so even less likely to relegate the fanfare to Edinburgh, though with the Russian entrant (Downton Abbey’s Dan Stevens) explicitly lampooning the Isles’ standing in the tournament its more likely the filmmakers’ subtle advocacy of the longstanding hope that Scotland will one day get their own highly competitive place.

As to Stevens’ contender, it’s a well-known problem that many of the countries which participate have appalling records on human rights and LGBT welfare. Amidst a more dramatically sensitive reckoning with this matter, his performance, Stevens’ best to date, is outright hilarious as Lemtov lion-tames extremely scantily-clad men about the stage in typical Eurovision fashion.

Lovingly landing jabs on the annual extravaganza, infamous for its nondescript, heavily generic slogans, the tagline ‘Perfect Harmony’ for the in-film comp shows that we’re dealing with real fans here, as does moreover the exclamation, as to why there are no cars on the road, that everyone’s “at home, watching Eurovision.” The film too acknowledges the constant push for and joy when singers indeed sing in Indigenous languages or emphatically about wherever they’ve ventured from with several seemingly throwaway gags, including a great one centring on whales, happily coming full circle.

Absent the voting process, this is too a stickler for Eurovision lore and procedure; though Sweden did have seven performers on stage and should have been disqualified.

Finally, there’s an odd tone at the centre of this film which arrests it from the heights of greatness to which Eurovision otherwise transpires. Co-produced by Jon Ola Sand of the European Broadcasting Union who makes an appearance here and in every Eurovision, even if, and it would be fairly speculative and unusual if so, full creative and parodic freedom were permitted alongside the name’s licensing rights and co-operation, a parody, even a loving one, just isn’t the same when the subjects and stalwarts are so in on the joke and stand to so outwardly benefit.

Yes Eurovision relies to some extent on being self-referential ala ‘Love, Love, Peace, Peace’ but it was only one year among many where the hosts winkingly outshone competitors; the platform otherwise persisting on a lifeblood of entrants’ own (and self-professed devotees) earnest if outlandish skewering. Regular commentator Graham Norton’s true to life cameos are notably distinct and illustrative in this regard; his mawkish if impassioned demeanour emblematic of the tone pursued herein, just like a local townsman declaring “we know they’re awful, but they’re our awful!”

It’s why Trey Parker and Matt Stone refused celebrities the opportunity to voice their own marionettes in Team America, and why Zoolander 2 never worked when all the fashion icons wanted to show they could poke fun at themselves as well. Sure it meant a lot of the gags here might not have happened, but if they’d called it almost anything else the same niche audience would have lined up and there’s no way the winners past wouldn’t have joined the festivities for what turned out to be our collective annual dose of insanity.

‘Eurovision Song Contest: The Story of Fire Saga’ is now streaming on Netflix