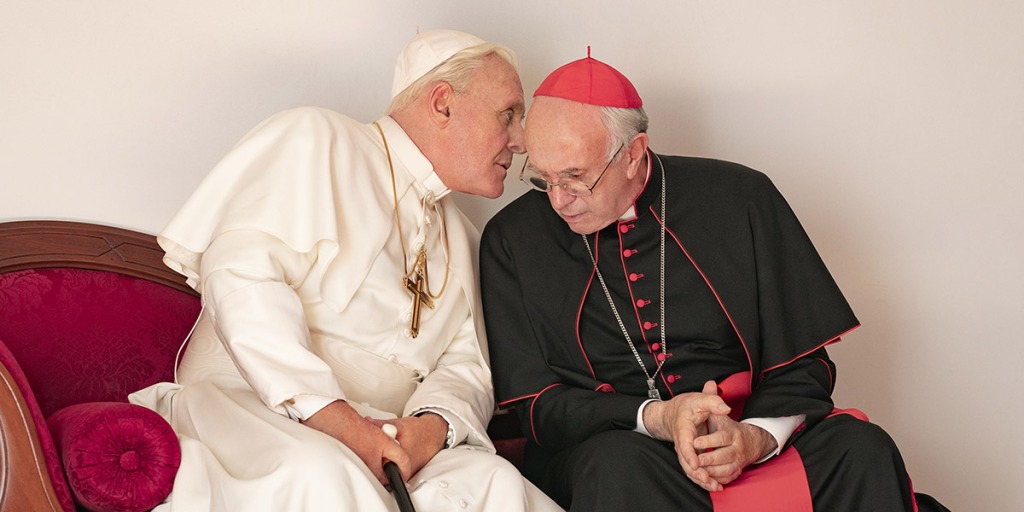 There being near nothing about this performer-centric, dialogue-heavy, near wholly linear setup that doesn’t almost entirely recommend it to a staged setting, given the chosen format the environment by no means remains static as we and our leads routinely wander through gorgeous backdrops. The back and forth halting at times to allow a relocation to a new juncture, there is but one instance, being the immediate aftermath of Pope Benedict’s revelation that he intends to retire, where the dialogue jars and the next story beat, skipping key subsequent exchanges, noticeably leaps as we do to a new fresco-filled outlook.

Jonathan Pryce is reliably superb, with the filmmakers too having found an ideal lookalike in Juan Minujin to depict Cardinal Bergoglio’s younger years. The film interrogates to an extent Cardinal Bergoglio’s formative decades in Argentina, the contentious aspects of this earlier time and their relevance given his ascension to the Papacy. While the controversy surrounding Pope Benedict’s formative years is acknowledged, the question is comparably given very little substance.

Turning to the handling of another contentious issue within the Vatican, being the institution’s responses to allegations of paedophilia, The Two Popes does cover this territory to compelling effect though frustratingly mutes the conversation at a key crux. This being a technique nay deployed elsewhere herein, it emerges overly conspicuous to the effect of drawing one out of the film while predictably disappointing many a viewer who would have relished a greater exploration of this matter not simply for the subject’s broader consequence but no doubt, with these exceptional performers in tow, the purposes of greater dramatic effect.

Hopkins is the far and above best element of this picture, bearing his finest performance since his turn as Burt Munro in The World’s Fastest Indian in large part for simply investing this with a great deal more gravity and purpose than he has routinely his many more recent, lacklustre films.

There’s an exceptional dry humour Hopkins brings to near every sequence, whether it be his interactions with the public (a photo-taking session with believers emerges as a highlight) or Pope Benedict’s wry, wizened retorts to the righteous, here unsure-footed Cardinal. Imbuing the contentious former Pope with a great deal of empathy as he say remarks on The Beatles, a band with which he is only nominally familiar, the credits sequence, so far the best of the year, is too very well worth the time.

The Two Popes is now streaming on Netflix