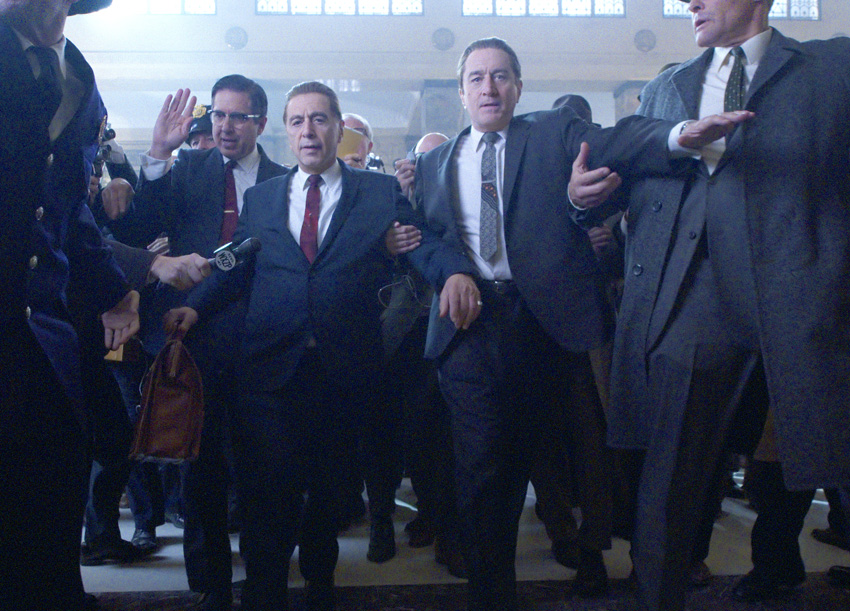 A lot of cinema’s most ardent and casual fans have been waiting a long time for a movie like this one. Far less have heard of Jimmy Hoffa; now far from the case.

The Irishman, an epic in the traditional sense and in such a manner for which that word was once esteemed, chronicles, over three-plus hours, one of the most contentious and high-profile disappearances in modern US history; transfixing on the days and indeed decades preceding it. The titular Irishman, Frank Sheeran, is here played by Robert De Niro who (and it’s no small joy to say this) reteams with long-time collaborators Martin Scorsese and Joe Pesci who returned to the screen to hang out with his favourites.

Al Pacino (Hoffa), turning in one of the best and most rambunctious performances of his career in this conversely mooted setting, is too a delight to behold and moreover in the extended sequences we happily see him share alongside De Niro. A weak performer nay in sight, the cast is littered with highlights including Harvey Keitel and Jesse Plemons in passing roles. Anna Paquin deserves special credit for conveying so much, as each central performer is so required, with long, plaintive or wracked stares as the case may be. As outlined by some of the debate surrounding Once Upon a Time… In Hollywood, a performer does not need dialogue to imbue a film with presence or resonance and none herein manage this task thusly, with lines notably absent in stretches, so emphatically as Paquin.

Long as it is and while the story would have made as much sense had certain sections of lesser consequence been excised, there is nay an aspect of The Irishman that merits cutting or which the film would have been greater for had the segment been absent. It being a special pleasure to spend time with so many well-drawn characters, a prime example, and one of the many hilarious moments, emerges in a sequence involving a fish on the back seat of the car. It doesn’t impart that which we could not have done without yet resonates as funnier and more memorable than most things you’ll see this year.

Now; the de-aging. It’s distracting and noticeable at first but with the film jumping between several eras and soon settling into a rhythm it becomes commonplace and nay disconcerting, in no small measure given the quality of the craft. There are exceptions, such as a younger incarnation of Sheeran assaulting a man outside a grocery store and other sequences predominantly demanding physicality from the actors rather than more dialogue-driven or emotional pay-offs. You can make De Niro look like a younger man but rendering the rest of his movements more akin to same is something different entire and unlike near all else frustratingly draws you out of the film.

A sad figure, this author would not go so far as to say Sheeran is depicted as a ‘useful idiot’ yet the tragedy of his visage, so falling under the repeated influence of those who wantonly manipulate and would rather have Sheeran do their own corrosive biddings, is a relatable one as the consequences of his violent actions pile up for those around Sheeran and indeed himself. When violence is depicted, the camera lingers, but never in a gratuitous manner to so emphasise the pain but alternately its aftermath and the effect it has not just on those it most impacts but those who perpetuate it. That which eventuates may seem clinical or clinically depicted, yet it ultimately underscores the abjectness of soul and emotional degradation so awfully inherent in here both minor and major crimes.

Scorsese’s most traditionally shot film in a very long time, gone are the visual flourishes, close-ups or quick-edits of say Goodfellas, The Departed or The Age of Innocence. Save the opening storybook-esque shot, the very lifelike treatment of the surroundings as if we might otherwise observe them painfully underlines that ever-real and ever-lasting about violence we might witness on any corner.

Meditating on the causes and philosophies of violence and drawing even on Sheeran’s experiences in the Second World War in the film’s earliest flashback, The Irishman causes us to confront what if any forms do or can merit justification, marking that sorrowfully analogous between actions witnessed from individuals, private entities and Governments though never understating any actor’s responsibility. Too maturely treating with sympathy even those most responsible for it’s proliferation in a cautionary, profound tale which focuses on all victims including primarily dimensions of this central character very few filmmakers would even consider broaching, we are so grateful Scorsese has for that which emerges both so thematically and creatively instructive and well worth the wait.

The Irishman is streaming on Netflix from November 27

The Irishman on Film Fight Club