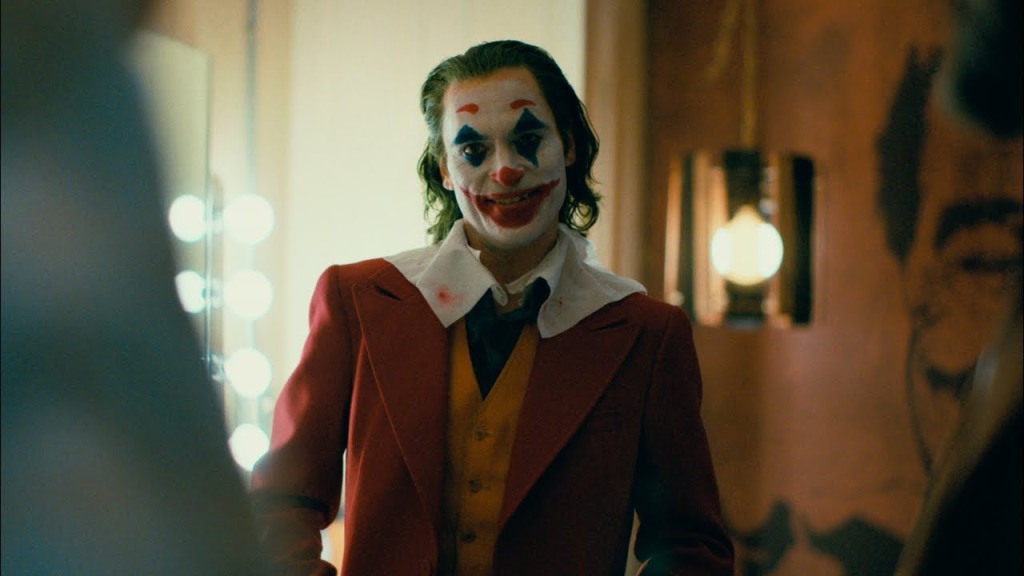 Think about it just a little bit – I promise you’ll give it more thought than just about anything this clown grants herein. Think about Cesar Romero, Jack Nicholson, Heath Ledger, even Jared Leto; all their iterations, however steeped in seeming chaos, hatched and considered every move they ever made so they were steps ahead.

What has made Joker arguably comic lore’s most famous villain isn’t simply his dress, manner, randominity or even the potential for open-ended characterisation. It’s always been about how a lo-fi street thug with an IQ of 300 consistently outsmarts Gotham’s greatest “with a few drums of gas and a couple of bullets.”

None of that’s on display here; not at all.

Much has been made, unsoundly and worse so without prospective contributors having seen the film, on Joker as an impetus for violence. There is nothing that suggests Director Todd Phillips and co are wanton in this regard. Far from it, the catalyst for violence, rather than being lauded, is at once a pitiful, pathetic, tragic figure; being moreover so in his most extreme acts.

Significantly, Joker is not the wily brain we’ve come to expect, with almost everything that happens to him or because of his actions occurring not as a consequence of any deliberation but by happenstance, blind luck or being in the absurd right place at an even more absurd time. Overcoming the pursuit of Police Officers not by ingenuity but due to the actions of others, adorning a mask at this point and at another jumping through a police barricade at the opportune time are about the cleverest things he does. On other occasions he’s shown to be his own worst enemy, including in one hilarious scene in a children’s hospital and another later on in Joker’s apartment. These darker, funnier moments, interspersed throughout, are among this film’s very best, as is the final image on which Joker rests; a promise of what this movie might have been had the Hangover Director more leaned into his comic, outlandish strengths.

Joker not being the brains of any operations yet experiencing such an unencumbered rise undercuts this otherwise erroneously grounded approach to Gotham here steeped in the imagery (and blatant symbolism) of Martin Scorsese’s 1970’s New York, which namely draws inspiration from Mean Streets and (overly so) Taxi Driver. This Joker being nay equipped for the role as traditionally realised may too undercut, and perhaps intendedly so, criticism that this figure is being in any way idolised by the filmmakers, yet the approach bears a direct dissonance with that which has otherwise rendered this icon resonant, believable and hitherto compelling.

The casting of Robert De Niro seemingly endorsing Phillip’s riffing on Scorsese’s oeuvre, the unavoidable King of Comedy comparisons, given De Niro’s now placement in that akin to Jerry Lewis’ role, like the direct hark-backs to Taxi Driver (Joker could just as well have done without all the pointing of fingers at skulls) are more distracting than necessarily symbolic. Otherwise laden with the imagery of other movies, the entirely unnecessary inclusion of Bruce Wayne and a formative event in his life, covered in now too many recent adaptations, was by no means compulsory; emerging tired and familiar.

On the matter of The King of Comedy, consider also the nuance with which De Niro and Scorsese portrayed Rupert Pupkin. Analogous in no small measure to this film’s own joker (Arthur Fleck) the depiction of Pupkin’s rise, not as here overwhelmingly encumbered by the language and motifs of a traditional hero origin story, made space for the hilarious irony which underlined the filmmakers’ much more apparent disdain for their anti-hero.

The fact that such an approach has been utilised for a villain as it might typically characterise one of the Justice League is fairly one of the more novel advents of this film, together with this, refreshingly, focusing on a (relatively) small-scale story rather than the wholescale destruction of some city or other. The film is unusually a drama and it’s perfectly fine, and revivifying, for a comic book adaptation to serve as such. De Niro is also exceptional as is Phoenix in every respect; for all this movie’s detractions their performances are faultless.

Yet it is the steering behind the camera that lets them down; the intendedly vainglorious characterisation of the triumphant Pupkin amid events rendering his accomplishments as evident self-delusion, intended to be mirrored here, overcome by the desire to more overtly reflect another irony in the superhero-esque treatment of Joker’s ascendance. Seen most overtly in Joker’s penultimate sequence, there’s just no place for the intended tragicomedy, as much as the creatives might wish to signal it, amid the deluge of language and circumstance so characterising a hero’s actualisation.

As to whether these particular instances could be read as treating Joker’s actions lightly, returning to the controversy that has unfairly dogged this all, the film is otherwise relatively clear in its approach and when viewed as a whole this is far from a potent takeaway. The emphasis is more muddled than feckless or forgiving as regards Joker’s worst traits; the seeming, intendedly ironic hailing of Joker at instances far from endorsing him yet when sparingly coupled with the now trenchant, ubiquitous stylings that aboundingly characterise an ‘origin moment’ (or moments) confusing rather than negating what could otherwise have been a readily apparent moral stand on this lead.

Turning to the politics of this movie (aren’t I a sucker for punishment), uber-wealthy Thomas Wayne (Brett Cullen) running for Government on a populist platform sounds a lot like, I don’t know, someone else. The only thing is that those who oppose him, as well as those who empathise with Joker, could be read as stand-ins for both pro and anti-Trump sentiment. Without reference to Phillips’ recent comments on wokeness, which will contribute a lot more to publicity than any discourse on Joker, these non-committal, open-ended politics which will inspire no end of debate are actually some of the film’s more interesting advents.

Serving as a basis for a novel, mainstream dissection of populism thankfully absent it’s overt anchoring to any particular modern movement, one can only wish that the rest of the movie, or Joker himself, had been nearly so clever.

Joker is in cinemas now