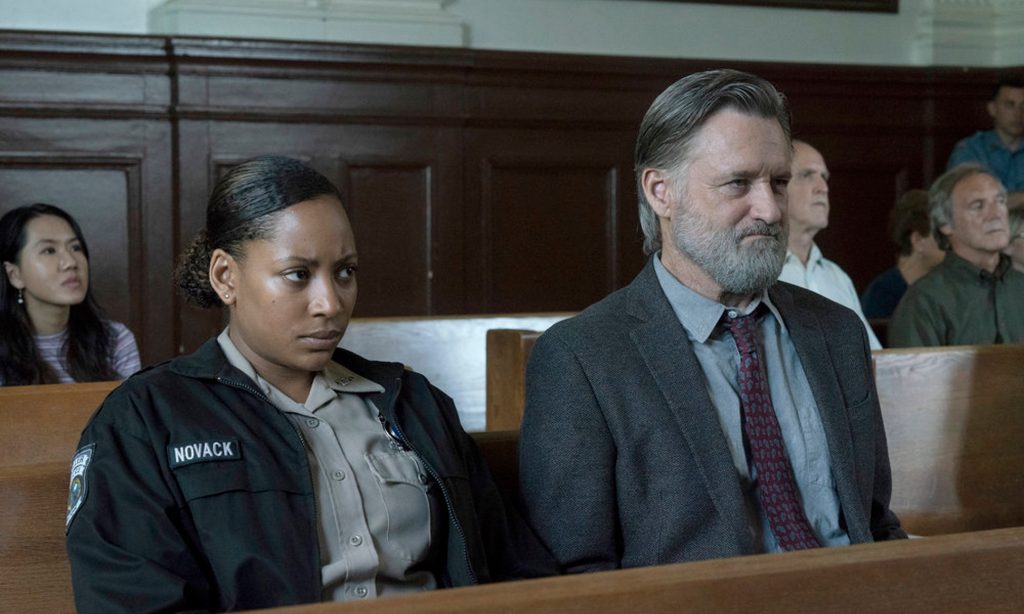 The Sinner is quickly becoming one of the best thrillers on US television – even if the second season isn’t quite a match for the first.

Benefiting greatly from star Jessica Biel, here returning off-screen as Executive Producer, the emotional mantle hoisted on her has now been dispersed between several characters, Bill Pullman’s Harry Ambrose among them, as the series pivots from a more singular character study to that of relationships and several curious figures.

Kicking off, again, with a horrific crime and two murders to which we are left in little doubt as to the culprit, the ‘whydunnit’ formula freshly gels amidst innumerable precursors where everything’s by and large wrapped up once we know who pulled the trigger. Pullman’s Ambrose, here returning to his home town, soon encounters amongst others ‘cult leader’ Vera Walker, played by Carrie Coon who is on a very strong trajectory this year. Showcasing the best performance in the season as we try to discern her moral compass amidst varied motivations, she is matched nearly by 14 year-old Elisha Henig as this season’s other primary focus Julian Walker, inevitably one of a number of worthy turns to come.

Appealing, as was for the first outing, for playing so well on our basic suppositions of detective fiction’s near invariable treatment of shady figures and in this case an ultimate and very clever subversion of our base instinct to seek out the ‘bad people’ in such works, The Sinner season 2 conversely falters in it’s final stretch.

Hanging much of the narrative on a sudden departure by one character in the show’s penultimate stages in what unlike the bulk of the series wreaks of contrivance, the inevitable twist, to be sure a wry one for the ages, rests on one particular performance, namely that of Natalie Paul as the investigating Officer Heather Novack.

Attempting to reach Broadchurch season one levels of inimitability and emotional resonance, still the modern standard for like fare, the overwhelming moments of bleak realisation are never so nearly achieved here, in part due to Paul’s talented co-stars consummately upstaging her at every instance and the season never quite granting Paul those key scenes which saw her Broadchurch counterparts so shine at their finest.

The Sinner is now streaming on Netflix

The Sinner on Film Fight Club