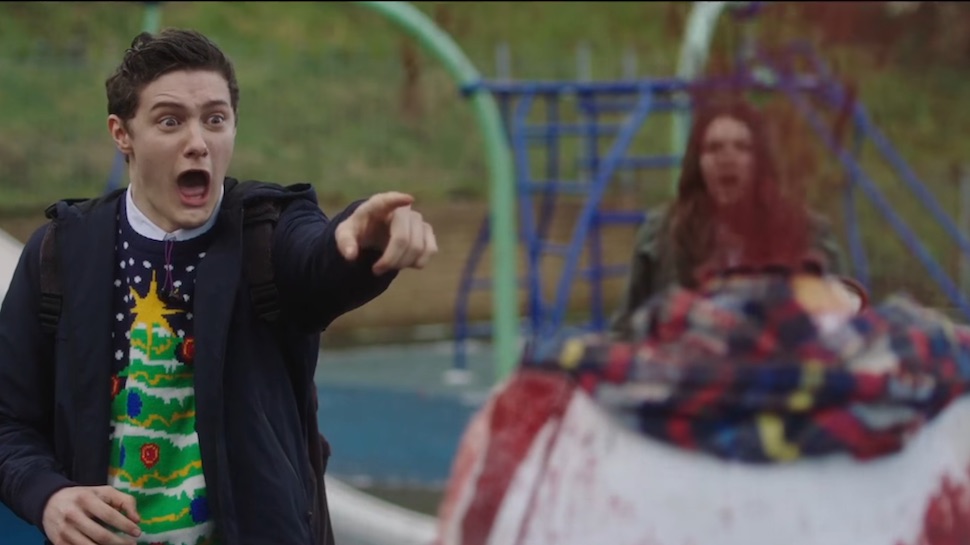 A contender for one of the worst films of the year, look elsewhere than Anna and the Apocalypse.

A small Welsh town, an encroaching Christmas; carols, families, seasons greetings and a horde of the undead. One of these is out of place, and that’s the one-note joke of this film.

When zombies start to filter into the backdrop of Anna’s (Ella Hunt’s) otherwise not irregular, musically-centric walk to school (yes, this is also a musical), for about a minute there it’s kind of funny. The idea of the undead casually crashing a quaint little town has been done before, albeit with better staging in the likes of Shaun of The Dead, with Anna and the Apocalypse even lifting Director Edgar Wright’s signature smash-cuts as main characters embark somewhere or other.

Imitation may be the sincerest form of flattery but as this film shows it is ill-advisedly a sure bet.

Reliving (forgive me) the same shtick over several awkwardly staged musical numbers as characters repeatedly immobilise zombies with the likes of giant candy canes, the film reaches an especially low point during such a re-enactment to the tune of a conversely mellow, well known Christmas carol. With lax scripting throughout, one of the most trying omissions occurs when a character professes one of the most egregious, painstakingly obvious exposition dumps of recent filmic memory.

This would not be an issue if the movie was broadly satirical, exaggerated or duly self-aware enough or a combination thereof to otherwise endear us to the schlocky mayhem, and yes there could fairly be a natural inclination to respond to such a criticism with ‘well, it’s a Christmas musical about killing zombies.’ Yet films aimed at and about any and every demographic even with a none too significantly greater level of considered character-deployment or plot-framing have proven that much more fulfilling. No creator can rely on a lackadaisical premise to simply suffice absent a broad consistency in tone with this glaring detraction only further exacerbated by the erratic treatment of material that is at times hyper-comic and without warning self-serious or too muted to sufficiently complement the outrageous aesthetic Anna and the Apocalypse otherwise pursues.

Worse still, the already nonsensical plot even amidst this brand of theatrics is done absolutely no service by a cringeworthy villainous scheme and villain to boot who really needed to go above and beyond in chewing the scenery to salvage any of this; the performer adversely lacking the screen presence or any compulsion that could render these segments even remotely engaging.

There’s plenty of films you can relax or zone out to over Christmas, you’re better not to make this one of them.

Anna and the Apocalypse on Film Fight Club