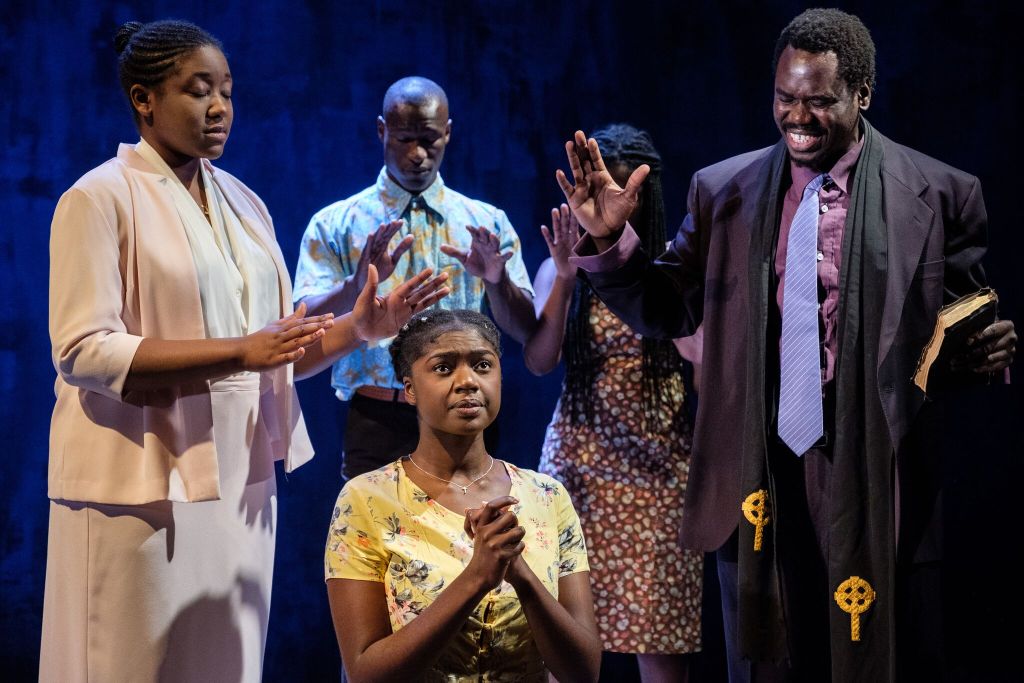 You wouldn’t expect a play about anti-gay violence in Uganda to nail its comedy.

Dembe (Elijah Williams), navigating a burgeoning romance with Sam (Damon Manns), an Irish Doctor himself of Ugandan background, has to be more than careful to not attract the attention of the locals, among them his family Wummie (Zufi Emerson) and Joe, a preacher (Mandela Mathia).

Nancy Denis (Mama) and Henrietta Amevor (Naome) round out the cast of the Outhouse Theatre Co’s and Seymour Centre’s latest production, figuring mostly in a moving story partly and regrettably extraneous to the main action which isn’t proffered as much time to be told.

Staged on a minimalist, earthen ground and slightly raised platform which permits it’s cast to mill around the action as necessary, a glaringly blue backdrop, propounded by blue lighting, clashes strongly with what otherwise invokes that considered and welcomely naturalistic.

The interactions between Dembe and Sam are heartfelt and uncommonly idiosyncratic. Never resting on a straightforward nor overly-besotted romance, to this end their conundrum is believable and all the more impactful. What is most engaging here is more so for being underlined by the not infrequent instances where the pair’s comic abilities and timing resonate most. No match for Mathia’s stage presence however, his implorations and protestations, many directed at the audience as if they were crammed in the pews, more than anything else situates and involves us in the action taking place so far away.

One of a number of flawed figures whose antecedents are teased throughout, the most complex and engaging addition is however Emerson’s Wummie. Neither a full-throated detractor of the prevailing societal circumstances nor that so contentious and inherent to Dembe, as she navigates the escalating tensions the play best manages its nuance and most compelling treatises as it steers towards a very moving, unexpected finale.

The Rolling Stone
By Chris Urch