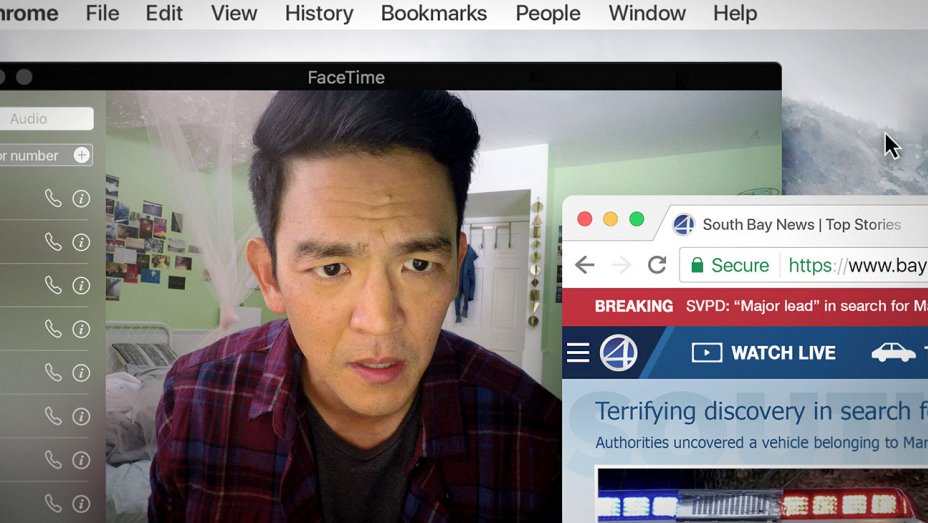 Before anyone says anything – we’re already looking at screens all day.

Taking place entirely on Skype, Messenger, Chat, Youtube, YouCast and anything that shows up on your laptop, a worried father (John Cho) searches for his missing daughter with the help of a local police detective (Debra Messing) and those out there on the interwebs. A style of presentation that might appear difficult or tiresome to watch, counterintuitively the effect is abundantly familiar and as a consequence readily absorbable.

Searching’s format allows for a slew of novel ways to cut between ‘scenes’ and different sequences as we transition across programs. Elements of the story however become more difficult to impart as we come to view varied webcam footage during key dramatic confrontations that unlike many aspects of the narrative (which otherwise adapt to the form) could have been better conveyed by utilising more traditional cinematography.

Capturing media sensationalism in the internet age better than most flicks, due almost wholly to the peculiarity of the story’s depiction and style, an emotive Cho is roundly engaging and instantly relatable as the father hurriedly seeking his only child. A twisty detective thriller with more than one surprising about turn, that signalling the denouement, among a great deal of the unexpected, is to a large degree coyly interspersed throughout the film.

The few coincidences ensuing that are largely a staple of like fare aside, one particularly unfortunate and clunky piece of exposition intimating a key reveal at a penultimate stage is jarring for being so abruptly expounded and so unlike the relatively subtle ways clues are otherwise incorporated. Misdirection is generally well deployed and all too reflective of how many might typically view those in their adolescent years, save a crucial red herring that in the final, clumsy stage goes ill-explained.

Memorable above all for breaking one ever-cautionary and cardinal rule of the detective thriller and to the film’s great credit doing it well, Searching takes several risks in it’s telling and is all the more commendable for it.