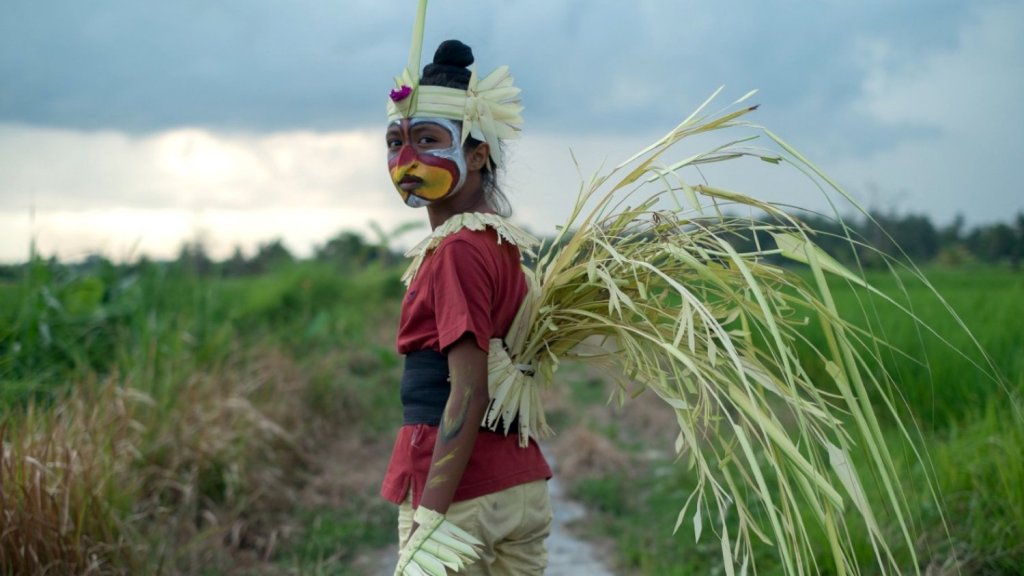 Most stories are better without a sledgehammer to drive it’s point home, though subtlety doesn’t always help.

Set in rural Bali, 10 year-old Tantri, contending with her gravely ill twin brother who is no longer able to communicate, soon enters a magical, semi-worldly realm replete with children and wondrous imagery. Centred on impending loss, grief and their not unrelated status to the fantastical, we, together with Tantri, venture further and further down this rabbit hole.

The Seen and Unseen first and foremost achieves in some scenes some dazzling cinematography; filmed in less than a month, the one opportunity to utilise the full moon in some of the film’s most memorable imagery is managed to great effect. The colourful and heavily symbolic costume design, relying to a great extent on the screen presence of the performers, like much else is a delight to behold. Some of the stand-out sequences include several figures intermittently milling around fields and varied landscapes at night, while the concluding sequence, the best in the film, harnesses the emotiveness established and laden throughout to bring about the most enduring gut-punch.

Having said this, the numerous stages in the lead up to the finale which invariably adopt The Seen and Unseen’s ever-recurring stylistic motifs are not nearly so compelling as what comes later which, to great and singular effect, otherwise supremely contrasts that imaginative and alternately all too real. Whereas similar films, the excellent Girl Asleep among them, deploy their other-worldly conceits with manifestly flagrant conspicuousness, the subtlety evinced in The Seen and Unseen so often does little justice to that which the filmmakers are trying to convey.

The former, a low budget film based on an theatre production in Adelaide, adopted a theatrical flair in it’s performances and else all too absent in this staging which, utilising muted depictions to proffer a ceaselessly symbolic bent, neglects to impart in whole stretches the palpable impact so deftly managed by The Seen and Unseen’s closing moments.

The Seen and Unseen on Film Fight Club