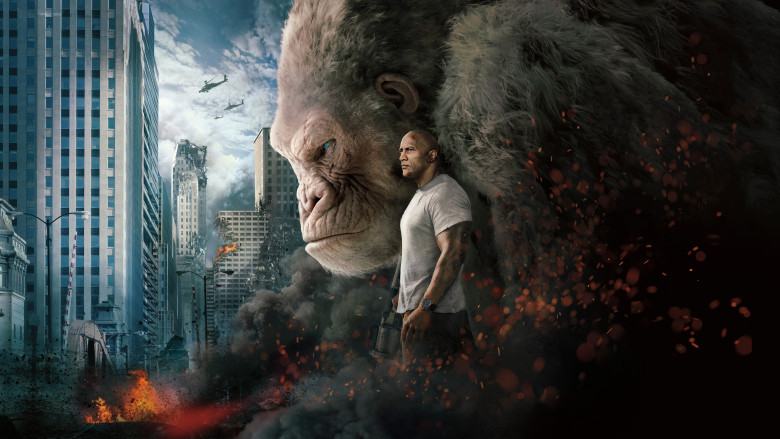 “Of course the wolf flies.”

This one line, uttered with seamless sincerity and Dwayne ‘The Rock’ Johnson’s boundless enthusiasm tells you everything you need to know about this movie. If you’re still reading, it’s because you want to know if this is the kind of dumb flick you can get behind, or, like so many of it’s hapless civilians, run away from screaming.

Thankfully, the aptly titled Rampage does not want to be that movie that wins best Director, or Screenplay, but the one that chuckles when it can slap Oscar-nominee on its jacket because the special effects budget could have funded the clandestine interstellar military program that of course didn’t go to plan.

Kicking off with what could just as well have been a showreel of 2017’s Life, after genetic samples crash-land in, of course, America, three animals that really shouldn’t be given super-size and strength become so big they even make Johnson look puny, almost. If anyone can track them down it’s evidently the world’s best looking primatologist, a trusty scientist (Naomie Harris) and for some reason The Walking Dead’s Jeffrey Dean Morgan, the clear go-to guy in this apocalypse who pointedly refuses to take any of this seriously.

Morgan, who might just as well have been making a different film, probably figured that if he’s going to at all fit in that he may as well be the most ridiculous thing in this movie. Carrying his cowboy, non-descript Government agent role off with heady aplomb, he is nearly matched by cartoonish villains Malin Akerman and Jake Lacy who, like everyone else, are clearly having a great time.

Are the near-escapes or any plans hatched at all believable? No. Is this a thinly-veiled metaphor for the importance of animal welfare and confronting poaching? Maybe. Does this film pull off a few classic homages to the monster movies of old, not least of all King Kong? Yeah. Does the Director of San Andreas solve every problem by putting The Rock in a helicopter? Of course.

Are the explosive, ridiculous over the top action scenes worth the wait? Yes. Is there a plane crash and monster finale that runs rings around The Mummy? Without question. Does Rampage show self-serious monster flicks, and there are way too many of them, how it’s done? You’d better believe it.

Rampage is in cinemas now