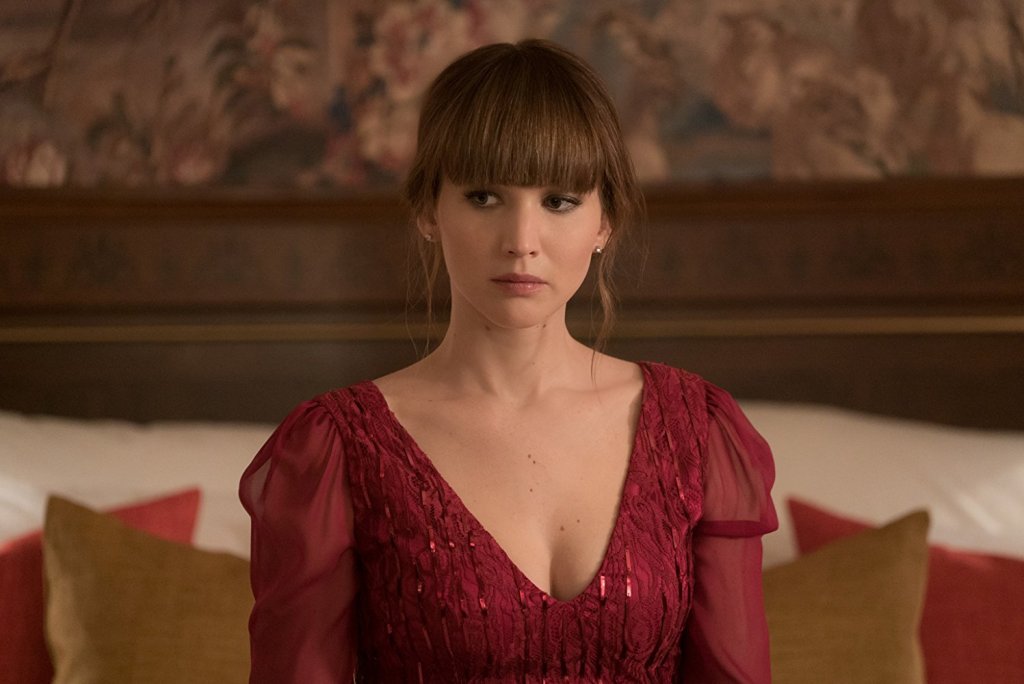 Somewhere, in the bowels of every major studio, is a pile of screenplays that since late 1989 have slowly been gathering dust. On top of one of those piles was Red Sparrow.

But for Charlotte Rampling pointedly assuring us that “the Cold War never ended,” a few mobile phones and the Russian intelligence service having to now tip-toe around Budapest, this film could just have well have been set in the 1980s or long before. Recruited to the elite titular spy ring to train in the arts of seduction and espionage, former Bolshoi Ballerina Dominika (Jennifer Lawrence, sporting one of this film’s many, many lacklustre Russian accents), at the behest of her powerful Uncle Vanya (yes, Uncle Vanya) played by Matthias Schoenaerts, is expected to give anything and everything in service to her country.

Based on the recent novel by Jason Matthews and too starring Jeremy Irons, Ciaran Hinds and a miscast Mary Louise Parker who, unlike her co-stars, glaringly refuses to take any of this seriously, the most convincing inflection comes from Australia’s own Joel Edgerton as, of all things, a CIA Agent. This would not be an issue but for it drawing us out of the action when the performers hover between Russian, English and American intonations, the latter to which they are far better suited. There are broadly two schools of thoughts regarding portraying dialects on film, that of either doing it convincingly or not doing it at all, ala The Death of Stalin, which invariably proves less distracting.

This failing aside, Lawrence is otherwise reliably superb in this semi-labyrinthine thriller that at times points too heavily to its series of near-inevitable twists and turns. One particular reveal for the purposes of dramatic expediency is so lazily done it beggars whether the natural evolution of events, as central as the particular crux is to the plot, necessitated it at all. The one arguably ambiguous moment in the film, taking place during the penultimate sequence, is comparably a classier touch.

Bringing its characters’ consternations regarding their actions and roles explicitly to the fore as they confront each other’s machinations, refreshingly Red Sparrow at least does not try to convince you that it’s highly trained centres of attention would not glean basic facts about their respective counterparts’ origins or motives. Having said this, the situation they find themselves in is fairly well-trodden filmic ground. There is a high-up mole who can only be one of a few people, earnest entreaties to be careful who you trust and, in the best traditions of James Bond and the like, hazy references to absent figures like ‘The President,’ because it might have been too much to put in a direct dig at the real life figures the film pointedly skewers.

The latest, in light of recent events, of what will no doubt be many films to further entrench Hollywood’s latent and less than favourable focus on Russia (with Creed II set for release later this year), Red Sparrow is distinct from many of it’s thematic forbears in that it would have you believe that it does not seek to emulate the likes of Rocky IV. The film attempts to draw a nominal equivocation of sorts between its respective spies’ lots by sparingly highlighting the gripes of its Langley lackey with his own superiors, though with the passing attention it gives this element Red Sparrow would have done just as well to settle alone on its avowed bent of highlighting all that persists in this take on modern Russia.

To this end, Sebastian Hulk’s brief and shocking turn bears among Red Sparrow’s most engaging offerings, though as rendered emerges regretfully underdeveloped.

The decision to depict Dominika as a Ballerina is a purposeful one; this film and its creators hell-bent on showing how even something here intended as symbolically pure can be corrupted by unforgiving forces that would permit us to normalise a relentless stream of violence; no doubt an intended effect of the filmmakers to highlight their own bleak view of this particular country. Helmed by thrice-Hunger Games veteran Francis Lawrence, Red Sparrow is notable for it’s similarities to the series that saw a young woman, intent on caring for her family, thrust into conflict with an unrelenting foe who would gladly pull her strings and then the rug out from under her had they the chance.

An intriguing-enough film that doesn’t bear thinking about too much either during or after, Red Sparrow is an easy sell for anyone, this author among them, who misses the thrillers of yesteryear.

Red Sparrow is in cinemas from March 1