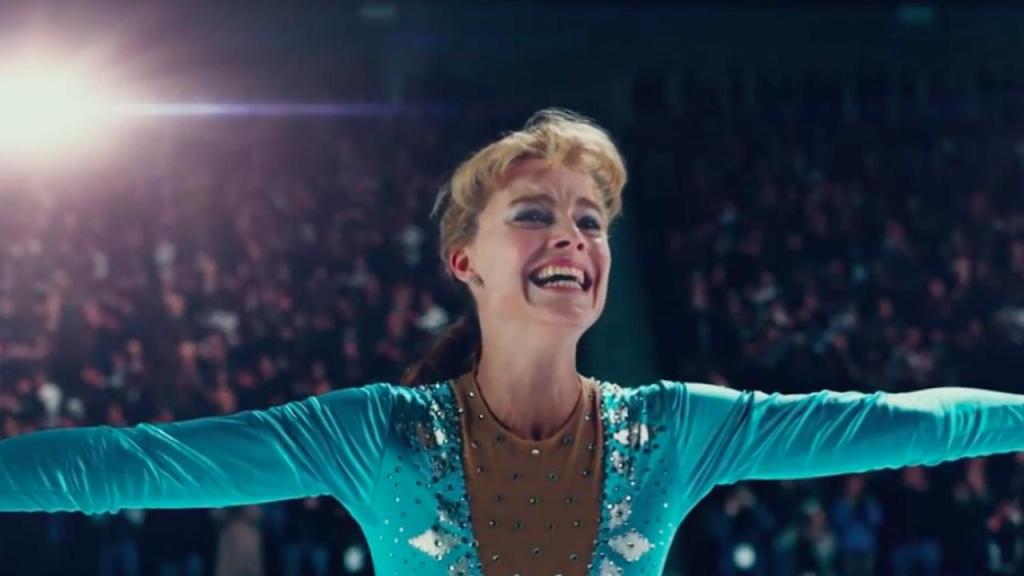 I, Tonya is a film about abuse and violence. There is also figure skating. And 80’s pop.

Does that sound like an irreverent take on something that’s anything but irreverent? Do you get the feeling this tonally unique fusion of wild contradictions went to a place it really shouldn’t have? Well it isn’t, and it didn’t.

I, Tonya, the “irony-free,” “true” story of 90’s figure skating champion Tonya Harding (Margot Robbie), is based on interviews with the Olympian, members of her family, ex-family and accounts of the infamous assault on her teammate Nancy Kerrigan. Here self-described as the then second most famous person in the world after Bill Clinton, Fright Night Director Craig Gillespie’s version or anyone else’s version of the crime may not be exactly what happened, though as Tonya stresses, that’s hardly the point.

The film avowedly blends fact and fiction in a compelling retelling that conversely doesn’t directly purport to be authoritative. Recognising the subjectivity and speculation surrounding so much of what transpired, even amidst a settled depiction of events, choosing to front up to the fact that this is anything but a documentary permits the viewer to enjoy this film for the rigmarole it is. Once a ubiquitous punchline, Harding’s story is here the conduit for every criticism of modern America that the filmmakers can muster.

I, Tonya is however weakest when sparingly touching on the media frenzy, only dedicating any real energy to this in the film’s latent act. A pointed and overly conspicuous reference to the O.J. Simpson trial towards its end, which transpired shortly following the scandal that shook the world of professional figure skating, signals that this film wants to but never roundly pursues a narrative about the press. Addressed in passing, I, Tonya is much else than a parable on how we have come to consume scandals in the age of the interwebs.

Depicting horrific and graphic abuse from her mother (Alison Janney) and husband (Sebastian Stan), it is jarring to see these acts overlaid with the upbeat stylings of Supertramp and Dire Straits, amongst others. Unrelenting, the film confronts the audience with the characters’ violence and dares viewers to pretend that the lyrical choices appending it all don’t tragically highlight how regular these events soon become, here an intended effect that seeks not to trivialize but sadly reflect the experiences of so many.

Speaking direct to camera at times, Robbie’s Harding eviscerates those she labels the instigators and enablers of her treatment, together with the narrative thrust both implicitly and explicitly linking it’s perpetuation to the film’s central focus; class. The working class Harding, having to affix her own sequins and work breakfast shifts amidst hours of training, as depicted comes across as less then favourable to the gatekeepers of her chosen sport.

Affirming the awfulness of Harding’s early years as in part a consequence of the socio-economic conditions impliedly absent in the lives of her competitors, I, Tonya too challenges those with contemporaneous memories of the scandal to reconcile their sympathies for the statedly singular predicament that shone the spotlight on Kerrigan with a lack of awareness or focus on Harding’s circumstances. In this respect, an already confronting sequence involving Harding and Police Officers only takes on its full significance at a later stage when the events for which Harding is best known unfold.

Robbie’s painstaking performance does great justice to the complexities of this story, playing Harding’s sequences to overarching dramatic effect. Her silently glaring at a mirror, or for that matter at the ice prior to a routine, is as intense and involving as anything else that ensues. Much of the film’s comedy too slyly exudes from some of her most dramatic moments, a function of the character’s precipitous brazenness and candour rather than any crassness the real Harding may or may not have possessed. The memorable, final sequence, one a viewer might traditionally hope would grant a reprieve from the yet unabating spectacle, is wisely slavish to Robbie’s considered portrayal.

Further recommending this film with stunning recreations of Harding’s key routines, let down to a degree by some hazily computer generated crowds, it is nonetheless Janney who delivers a peerless performance that as much as Robbie’s merits Oscar gold. Dispassionately and blatantly portraying an extremely unsympathetic figure, it is the screenplay, not Janney or her co-stars, that packs a wholly unnecessary parting shot at the character’s status in a film that would have you believe it does not seek to adjudge it’s fixtures.

I, Tonya otherwise by and large steers clear of rendering it’s players as gags in this manner rather than pieces in an intriguing and statedly elusive crime. This is save a biting portrayal of one hapless and as depicted blameful conspirator, the subject of much ridicule throughout. The film imparts little of this character’s motivations or else bar his involvement in the crime, the fact that he is overweight and that he still lives with his mother. He is further ascribed, together with Stan’s character, as “two of the biggest boobs in a story populated solely by boobs.”

The pair are labelled as such by Bobby Cannavale’s Martin Maddox, a composite of 90’s reporters pursuing the story and the only figure to exist outside the bounds of the action and simply as a function of exposition dumps. His is the only really nonsensical addition to an otherwise cleverly crafted biopic that, in spite of managing to fall foul of some of its own criticisms, still propounds it’s searing treatise on class in modern America.

I, Tonya is in cinemas now

I, Tonya on Film Fight Club