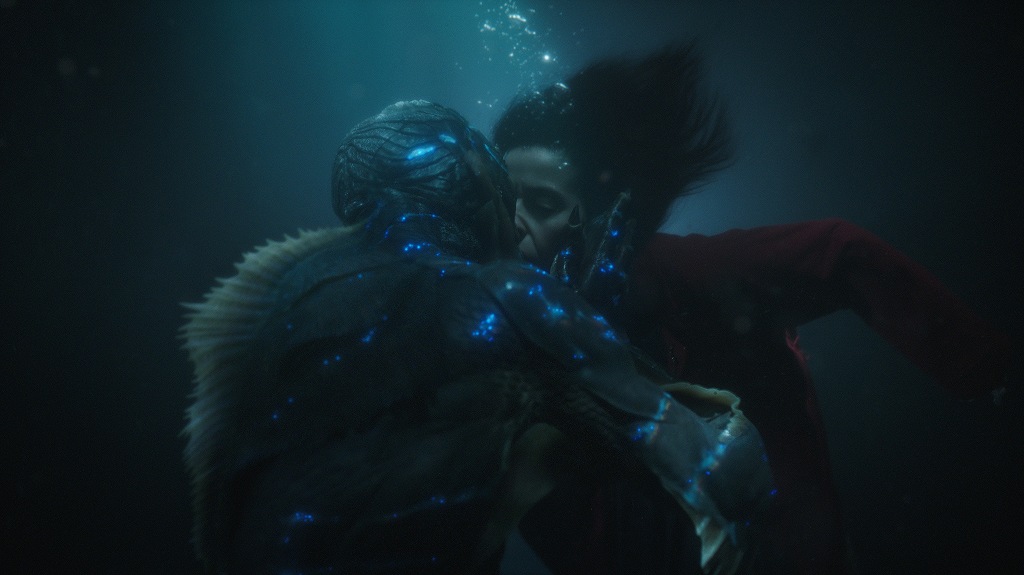 Here combining the wonder of the most elusively mysterious monster fantasies with the loving spells which better characterised the unabashed idealism of epics past, Del Toro gives us Sally Hawkins’ (on quite the trajectory this year) cleaner Elisa; tasked with scouring a secretive Government facility helmed by an overbearing director (Michael Shannon) and a comparably friendlier senior scientist (Michael Stuhlbarg).

Having brought in a top secret specimen, the creature, billed only as ‘Amphibian Man’ (Doug Jones), soon encounters the mute Elisa, and things blossom, and escalate from there.

An eclectic and fairly explicit fantasy at times, their pairing is all the more resonant for the ability of the film’s co-Writer/Director and his top-billed to emphatically convey the burgeoning romance between two figures who cannot and do not communicate in a manner to which leads of major Hollywood pictures are typically accustomed. Jones, used to imparting roles with less than traditional and here all-encompassing technique, like so much laden before viewers is an uncommonly rapturous sight to behold.

As good as they are, it is Shannon nonetheless who delivers the most compulsively mesmerising performance, drawing out unusual nuance in a straightforwardly irredeemable character who, in spite of his particular nature and a temperament that would normally see him relegated as a cartoonish sideshow, is here given an unusual and thrillingly large berth.

Shannon’s turn is only propelled by Del Toro’s treatment of the character, layering on levels of objectionability and yet further reasons to despise him that through Shannon’s capability only renders his villain more engaging. An awesomely gruesome scene shared with the consistently reliable Octavia Spencer in the film’s latter half is among Shannon’s varied stand-out contributions.

Richard Jenkins hovers around proceedings in this feature’s one comparatively ill-judged role that lacks a resolute arc, while a subplot involving some largely nondescript Cold War-warrior Russians renders itself slightly more cartoonish then all else, even amidst a giant sea creature arriving in Baltimore. Stuhlbarg, near rivalling his compassionate turn in Call Me By Your Name, as good as he is justly plays second fiddle to the central dynamic, a romance beautifully writ large in broad yet uniquely colourful strokes.

Forgoing a Disney-esque treatment of some of it’s fantastical subject matters, Del Toro’s latest is a refreshing adult romance that, in the exploration of it’s star-crossed species’ emotional and physical interactions achieves both the palpable energy of less light-hearted fare and the welcome vibrancy familiar to the sweeping tales of decades past that in more than one sense of the term takes its calls from the best romantic traditions.

Captured in a style recalling classical, beloved tones of cinema and tellingly taking place in significant part above and within an exquisite Orpheum largely of a bygone era, The Shape of Water’s cinematography and direction are only two of many reasons to seek out this triumph. Suggesting one or other inevitable conclusions throughout, the final scene, boasting a shrewdly obscured and altogether upending twist, is the film’s most memorable and among it’s more inspiringly creative moments.

The Shape of Water is in cinemas from January 18

The Shape of Water on Film Fight Club

Leave a Reply to FILM FIGHT CLUB S2E2 – THE POST, THE SHAPE OF WATER, MOLLY’S GAME & ALL THE MONEY IN THE WORLD – FalkenScreen Cancel reply