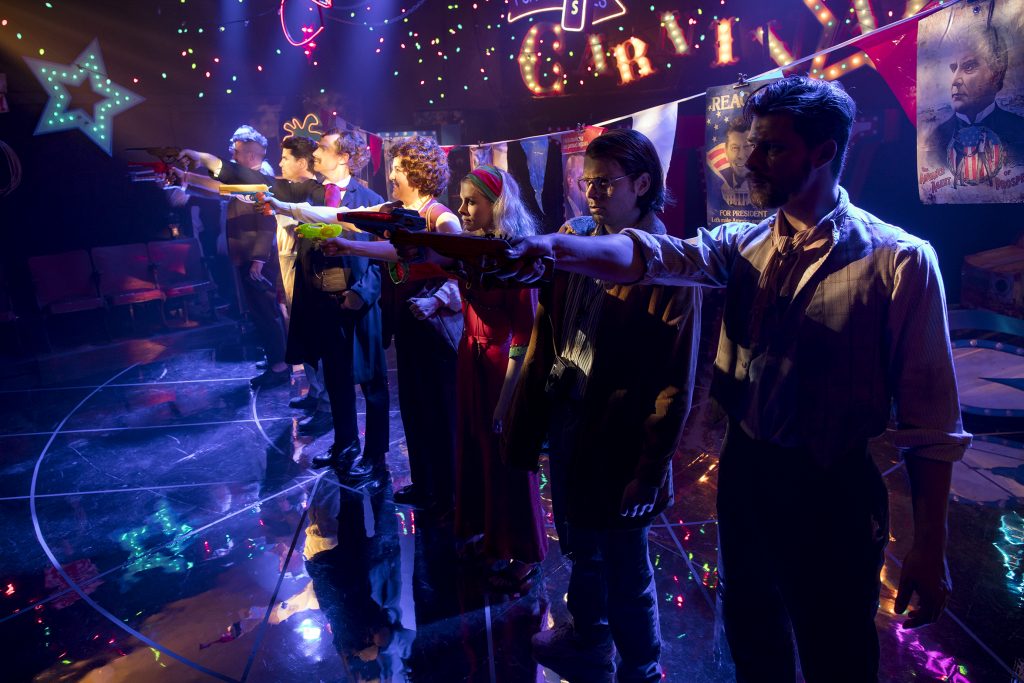 Have you ever wondered what would happen if every assassin of an American President got together for a musical?

A gaudy romp through the history of infamous and lesser known public enemies, it’s not easy to do a song and dance about a subject so abundantly macabre, and less so about those who may not have endeared the public’s curiosity so much as John Wilkes Booth or Lee Harvey Oswald.

The former (David Campbell) a distinctive feature of this production by virtue of a convincing 19th century garb and do, a couple of flashy songs set the scene for the revolving door of what are here trundled out largely as a crew of none too social individuals hungry for fame. Struggling to squeeze a laugh out of the likes of John Hinckley Jr., Lynette Fromme (Hannah Fredericksen) and Charles Guiteau (Bobby Fox) emerge as rambunctious highlights of the show, the latter capping off a number with a tense jump-rope sequence to great effect.

The ensemble cast faring significantly better, the larger numbers are ultimately more of a thrill, enjoyable in no small regard for the clearly effortful lighting design adorning the circus-style setting. The unglamorous figures (of which there are a few) packing less of a punch, for the grander sequences the Hayes Theatre Co have remained comparatively ever so reliable.

Meandering over the boundaries of good taste and testing the limits of an audience’s capacity as any good staging should, one sequence involving an apparent recreation of JFK’s final moments will no doubt be among the show’s more memorable aspects. A later hint at the production’s purported relevance to events current, if fairly an innovation of productions years past and only one element of the show’s subversive streak, in the prevailing environment renders itself as a tonally distinct ploy even beyond the brazen parameters set in the play’s preceding stages.

Less relatable for the target Australian audience than some of Hayes’ other choices, Assassins still packs a slew of great numbers and the calibre of production design now emblematic of the company.

Assassins was staged by the Hayes Theatre Co