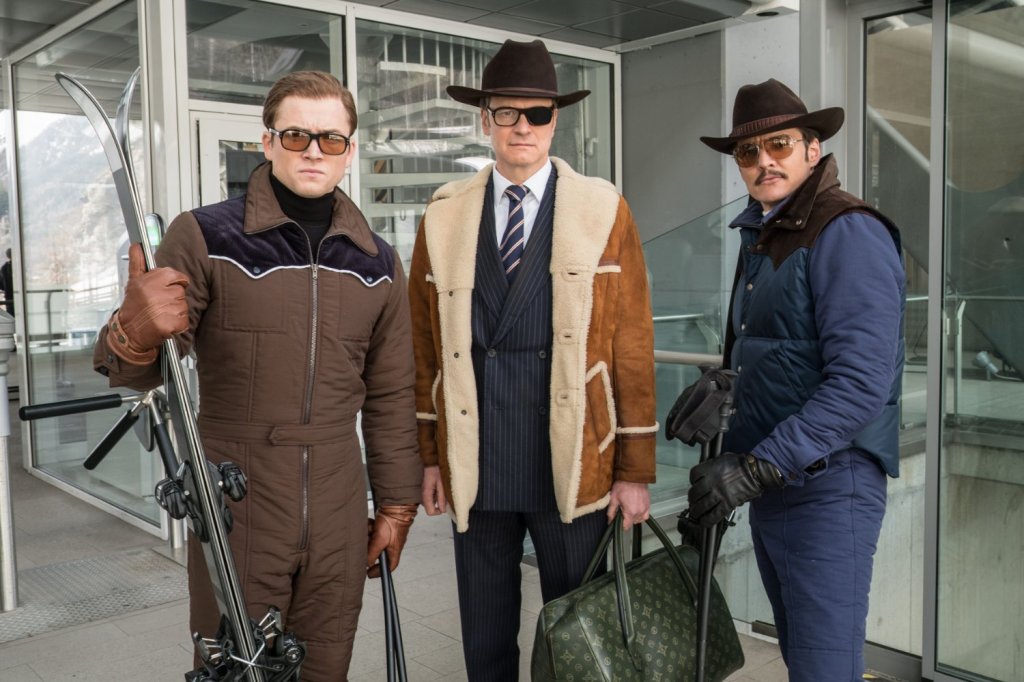 This holds whether you go in looking for a pure action-romp, here indulgent and purposely affronting even beyond the already immoderate restraint of Director Matthew Vaughn’s earlier and surprise success, or, depending on your world view, either a satirical take on the prevalent Hollywood zeitgeist or subversive gut punch to anyone who ever thought the industry catered to only one side of the political divide.

2015’s Kingsman, a film where a group of stuffy aristocrats turned a punk street-kid into a dapper English gent only to take on a black environmentalist tech-mogul harping on about global warming could at once be viewed as a subtle jibe at what makes so much of Hollywood tick or a blustering affirmation of that which many blockbusters roundly and none too subtly decry. The sequel, devoid of the originality or villain that so well serviced star Taron Egerton’s feature debut here stumbles through scene after scene that more often than not rises only ever so barely above the serviceable depths of fan-service.

In typical sequel fashion ala, oh, lets say, Men in Black II, Eggsy (Egerton), now a fully-fledged private intelligence go-to, has to contend with a diminished Kingsmen, his crew, save trusted pseudo-Q (Mark Strong), injudiciously rendered absent early in proceedings. The roundabout return of Colin Firth’s mentor, being none too much a of surprise given his centrality to both the first film and promotional material, here exudes precious little of the muscle or manner that rendered him so endearing the first time around; fulfilling an altogether very different function in the follow-up. Channing Tatum, Halle Berry, Jeff Bridges and Pedro Pascal as the band’s US counterparts (the Statesmen) hold much more promise than is ever realised – the latter the only among them to herald a more than passing or impressing screen appearance.

The villain, Julianne Moore, flounders around her secret jungle lair for almost two hours of a more than touch too long film just waiting for Eggsy to turn up, revelling in 50s-chic surrounds tacked on in a futile attempt to make the signature foil appear anything but one-dimensional, the tidbits never playing into her persona so well as Valentine’s (Samuel L. Jackson’s) eccentricities serviced his thoroughly more creative megalomaniac.

Falling into the same trap of innumerable follow-ups, a stand-alone if distinguishing joke from the first outing here strives to serve as one of the underlying plot strands, bearing none of the shock value of its first iteration and here eventuating in the film’s most conspicuously ill-judged venture that pervades even the strained bounds of taste otherwise observed throughout. Vulgarity and worse neither necessarily a vice nor detraction from any picture, if deployed in service of a considered end as deftly evidenced so often in the likes of South Park, can conversely, as apparent here, bear the ability to adversely colour an entire film.

It’s drawbacks nonetheless largely fail to detract from The Golden Circle’s sparingly good action sequences, save the altogether cartoonish and beyond improbably frenetic opening car chase which doesn’t hold a candle to the more (if the term here is at all appropriate) subdued scenes featuring Tatum or Pascal. The same goes for the film’s accomplished performers (among them five Oscar winners) who together manage to champion Kingsman’s distinctive if here ill-defined campiness.

Be warned however; if you rest or ruminate on this all too much, or any of the film’s extravagant set-pieces, you might find yourself groaning in frustration as the filmmakers traipse and blaspheme even their own realms of physics, logic and good taste.

Likewise, a cursory consideration of the film’s political ramifications, with an at times not unapparent, avowedly partisan approach to the stated issue of illegal narcotics pervading the feature, replacing the ostensible themes of the first film, may in turn, along with No. 2’s mainstay sensibilities, cause those of divergent political leanings to either relish or consternate at the action, in the case of course that any or all of this is at all taken seriously.

Above and beyond all this, the film’s most upending addition, that of Sir Elton John’s discography and what we are repeatedly affirmed is Elton in not insignificant stages will both perplex and, through the bare believability of what has been widely trumpeted as the titan’s avowed presence, delight. For any Elton fan, this author foremost among them, seeing some of his greatest hits writ so large on screen (along with a few cheeky references to his wider output) will warm the heart, whatever else comes before or after.

If by chance you are an Elton fan to some degree, in my case having preceded this film with a four-day road trip replete with Elton B-sides and an appearance in Wollongong by the man himself only the night before, then you certainly have no excuse not to see this movie. If you are not, but don’t care to think too deeply about anything and everything resplendent before you, then it’s a passable way to pass a few hours.

Kingsman: The Golden Circle is in cinemas now