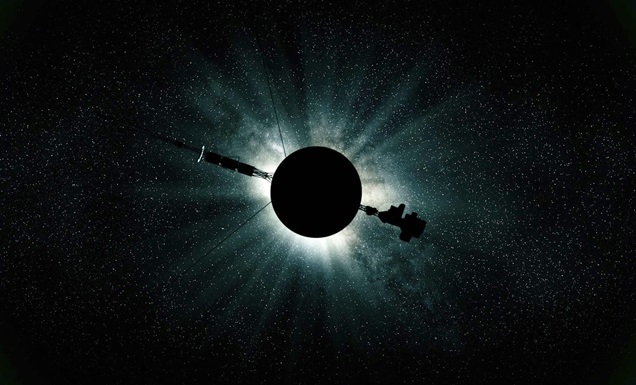 Imagine knowing that the first time extra-terrestrial life hears a human voice, it might be yours. Or better yet, Chuck Berry.

Charting the Voyager project from the get-go to, as Star Trek fans can attest (many of whom will get a chuckle out of this documentary), its indeterminate finish, The Farthest is just that, exploring where, and how far-reaching, ambition can take us.

Featuring, amongst others, the Voyager team, the few who got to contribute their greetings to intergalactic folk in oh so many languages, those few depicted in the documentary who had to make the very difficult decision of just what music to send into space and the irrepressible vocal stylings of Carl Sagan, for anyone who ever wanted to know anything about just how, and why we got into the space-game, this documentary has you covered.

A feature-length version of the serialised ganders at interplanetary wonder many have discovered befits both educational and more, recreational viewing, Director Emer Reynolds permits you to marvel at the enthralling visuals now more topical than ever, given the intimate images recently captured of so much of our solar system. Eye-watering throughout, The Farthest will be an absolute treat for all those interstellar-tragics, this author included, who find the idea of manned missions to Mars and other big chunks of space real-estate within our lifetime positively exhilarating.

Moving from the theoretically intoxicating dimensions of Voyager, belaboured greatly by the crew and none-too-shabby list of experts, the practical limitations of the program and stumbling blocks (numerous throughout the project and often as engaging as the fundamental thrill of space travel itself) are given comparatively little screen-time so as to cover the full gamut of Voyager’s known life-span. A subject inherently so expansive and consuming, while thoroughly intriguing such material is still somewhat better suited to a more finite, episodic format to better focus on varied aspects of space exploration, with the filmmakers nevertheless attempting to depict a wide-ranging, decades-long era of endeavour within a two hour run-time.

A joy for the enamoured nonetheless and those who want to know just that bit more about how we got our voices up into the stars, The Farthest is endearing above all for its examination of why we would ever do such a thing, a question, that like space, as almost all of the film’s contributors drill home, opens you up to an endless range of possibilities you just can’t wait to explore.

The Farthest is screening at the Sydney Film Festival