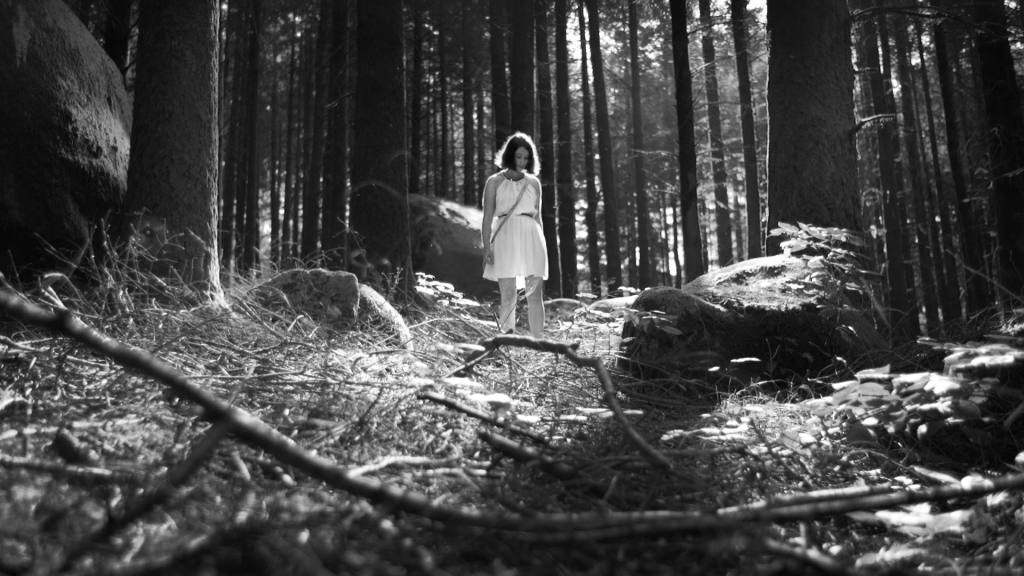 Let’s go with glass half full.

The debut feature by Portugese Director Jose Pedro Lopes, The Forest of Lost Souls, at least for the first Act, is engrossing horror.

Set upon dying in a forest where those resolved to end their lives typically venture, a father, on his last day on earth, here encounters a young woman, too intent on taking her own life. It’s never quite clear what brought either of them to this spot, but you know there’s something’s very, very wrong with this picture.

Exchanging awkward pleasantries against the hideously macabre setting, you may as well be watching a Beckett play, and a good one at that, as the opening unfolds. Eerily transfixing in spite of the seemingly nonchalant conversation, the action builds to an inevitable climax with a twist that will more than likely be readily apparent to the seasoned horror fans amongst us; the devastating impact of which is by no means lessened by its foreshadowing.

Filmed in black and white, Lopes’ opening frames and key moments throughout are littered with morbid visuals, themselves a fixture buoyed by the searing chrome palette that recommends the initial action all on its own.

The execution of the latter portion, regrettable and comparably lacklustre to all that came before, very much appears as if it is part of a different film. Reverting to a related yet almost wholly separate narrative, any emotional investment in this story established so well in its earliest stages is abruptly severed well before the film’s conclusion, leaving a meandering, largely pointless epilogue to the drama.

The second Act an entirely different type of horror flick that may as well have left The Forest of Lost Souls’ opening shocks to their own devices, effectively diluting the tension so well developed, some selective editing whereby sections of the film’s lesser segments were included earlier on could have actually created an additional layer of dread and further provided context to bolster a uniquely tense set of circumstances. As it is, the not unimpressive performances of the main cast notwithstanding, The Forest of Lost Souls excels for a brief 30 or so minutes then flounders as a feature for what would otherwise have constituted a phenomenal, shorter picture.