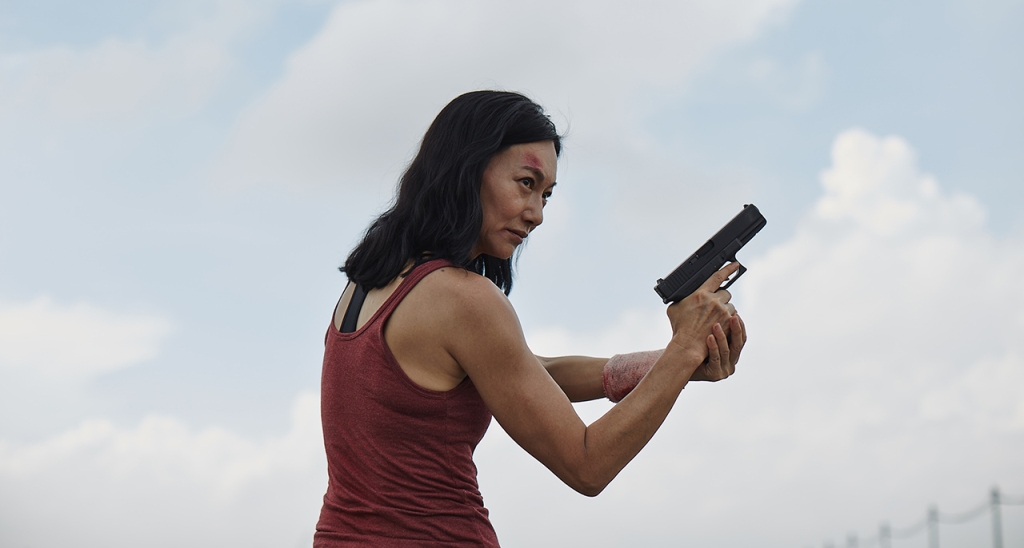 It’s becoming increasingly apparent that criminals, assassins or anyone with a ‘particular set of skills’ won’t be enjoying an early retirement.

Mrs K (prolific performer Kara Hui) and her husband are forced out of their nice, quiet life when their daughter is kidnapped by former acquaintances and partners in crime. That the couple thought they could just ride off quietly into the sunset is one thing; that the kidnappers thought there wouldn’t be retribution from a figure who establishes in the film’s earliest frames that she is a force to be reckoned with is something else entirely.

Inevitable comparisons to the recent John Wick and Taken series aside, the success of Mrs K rests on the few moments when Hui, not restrained by a captor or otherwise occupied, is let loose on unsuspecting henchmen. Of these there are few however, the film shifting focus in its later stages in parts to her husband’s heroics, a character, who gets the best line in the film to boot, that is markedly underdeveloped compared to Mrs K or their daughter.

Much more interesting are the film’s villains, including an assailant who shares the best action sequences with Hui, providing the heftiest physical challenges early on, as well as a colourful casino flunky who gets introduced all too late in proceedings. The fight sequences themselves, if kinetic, are very snappily cut, often allowing a dramatically short focus on any of the theatrics or most thrilling moments when Mrs K finally takes on her aggressors.

The surprise inclusion of three departed figures in a particular exchange is one of Mrs K’s most intriguing innovations, even if the like doesn’t rear its head again throughout the film’s run. A haphazard attempt to infuse the main villain with a Bond-esque foible, namely his inability to sleep for two years, plays one part in a finale less satisfying than the remainder of the film, while a few of his hired goons, some of whom are quite memorable, nevertheless come from the henchman school of sleeping at all the inopportune times, leading to Mrs K’s most frustrating plot turns nevertheless crucial to the outcome of events.

Hui is still a treat to behold, even if her considerable skills are deployed sparingly, resulting in an enjoyable if wanting action flick.

Mrs K is screening at the Sydney Film Festival