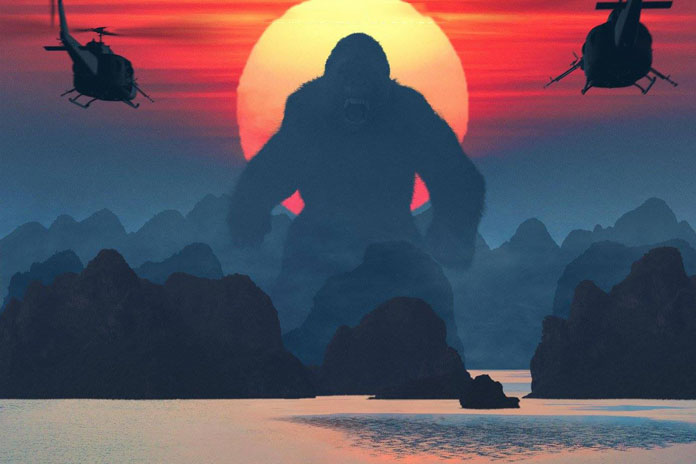 Anyone going to see Kong: Skull Island would likely have one of two expectations. One, they’re in for a big, explosiony, cgi-filled action-fest with lots of weird monsters and people trying to kill them. This is the movie Brie Larson and Tom Hiddleston tried to make; marooned on an unchartered island immediately following the end of the Vietnam War with a bunch of soldiers and lots of testy ecology.

Or two, something that’s aware that we don’t need another self-serious action-adventure, least of all one about a giant ape fighting something called ‘skullcrawlers,’ and is willing to have a lot of fun at its own expense. This is the movie Jackson and Reilly made, and the result is something very much in between.

Jackson deciding to take on the King of the Island or just telling people that this is how it’s going to be may never quite reach the dizzying heights of Snakes on a Plane or any of his best Tarantino-isms, but by gum he has a go at it. Reilly, the happiest pilot ever to be stranded on an island for 28 years, could have been one of the worst deus ex machinas in a film of recent memory if he hadn’t so joyously hammed it up, delivering Kong from what could have been a regrettable attempt to be just that bit too aggrandising or gritty.

Hiddleston, woefully miscast as some jungle-savant, has precious little to do here beyond look suave and restate how the situation has gotten progressively worse. Larson, who at least looks the part, hasn’t much more to contend with. At least twice in the film a character screams words to the effect of “did you just see that, why hasn’t anyone said anything about what just happened” following an attack by some yet undiscovered creature that you’d think would beggar any logical explanation. The more seasoned stars could likewise have taken their cues from those around them who reasoned that no one on this expedition (except perhaps Samuel L Jackson) can really be prepared for all this and it’s ok to have a little fun.

One particularly surprising scene involving what was meant to be a heroic sacrifice almost, almost belongs in what could be a parody of this film. Kong, which has the gumption to draw an analogy between its high-flung scenario and the conflict in Vietnam, with multiple Credence Clearwater Revival hits dialled up to the max, strangely also has the ability to revel in the absurdity of its whole premise, drawing astonishingly hilarious moments out of otherwise standard sledges of drama.

While the action has a lot to recommend Skull Island, not least of all when a flying tree trunk fells a helicopter or when a giant spider eerily disguises itself amongst towering bamboo, if you want to enjoy this film, it’s better to watch the one Jackson and Reilly were trying to make.

Kong: Skull Island is in cinemas on Thursday March 9