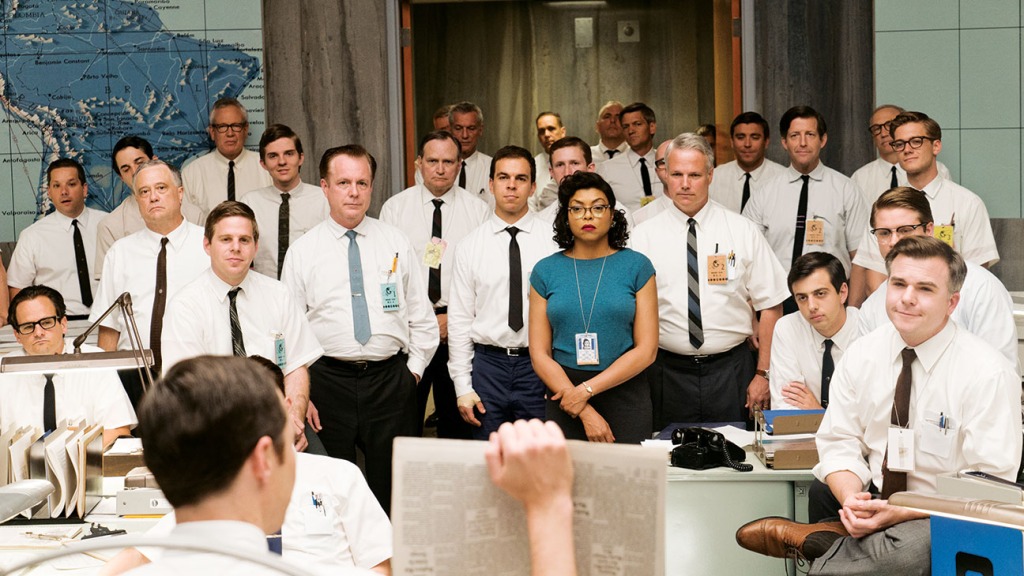 The only flick that managed to knock Rogue One off its perch at the Box Office, it’s not hard to see why.

Taking the top spot on opening, Hidden Figures, one of several Best Picture nominees and popular releases depicting historical racial tensions in the United States, hits a chord to which many of its more dramatic counterparts never come close.

Bound to leave any audience member with a smile on their face only eclipsed by the film’s enormous heart, Hidden Figures, based on the true story of three African-American women who made indelible contributions to America’s ambitions at the heights of the space race and continuing racial segregation, is as affecting as it his unwaveringly hilarious.

Katherine (Taraji P. Henson), the trio’s sharpest tack and the first African-American woman to be seconded to an elite NASA division tasked with developing the mission’s crucial math, struggles with the small ‘colored’ coffee pot meant solely for her, amongst other challenges, while taking care of her kids and attempting to spend time with new arrival and suitor Colonel Jim Johnson, played by Moonlight’s Oscar favourite Mahershala Ali in another brief yet distinctly memorable performance.

Dorothy (The Help star Octavia Spencer), the de facto leader of a computer division, has to contend with an obstinate supervisor (Kirsten Dunst) and the advent of IBM, while Mary (Janelle Monae) fights for an engineering qualification, denied to her through discrimination in the school system.

All exceptional performers, the film, save the unfortunate type-casting of Big Bang star Jim Parsons as a stroppy scientist, is a model of exemplary casting, not least of all due to the ideal addition of Kevin Costner as NASA boss Al Harrison. Reliably compelling, the seasoned actor was one who was always going to deliver, and then some, but never so much as to chew the scenery in a picture where any number of others would, ill-advisedly, have sought to steal the show, given Costner’s heft of screen time, in a story minimally about his character. In one of the film’s most highly-publicized and best sequences where Harrison literally strikes a blow against segregation, Costner wisely never overplays his role or attempts anything too grandiose, for in this he and all others are justly wallpaper compared to the film’s three transfixing central figures.

Focusing on attempts by NASA and the Soviet Union to send a man into space, Hidden Figures is as good a film about the sixties that has been released in recent memory as it is a faithful exploration of the ceaseless wonder with space which made hits like The Dish so popular. The dual emotional anchors running through Hidden Figures, namely the boundless sense of optimism in being able to reach beyond earth’s atmosphere, mirrored in some senses by the prospect of the other side of a bitterly fought civil rights struggle, are managed here seamlessly and emphatically, creating in every sense an aspirational and wholly fulfilling picture.

The filmmakers’ intent in this regard not unclear at times, most literally so in Mary’s moving court appearance and aftermath, does not at all detract from a film that more than grounds its characters and gives any rapt audience member able reign to laugh and cheer throughout.

Ideal for all ages and a justified hit, Hidden Figures may not be a frontrunner for Best Picture nor up there with this year’s best, but it is a worthy contender.

Hidden Figures is in cinemas on February 16