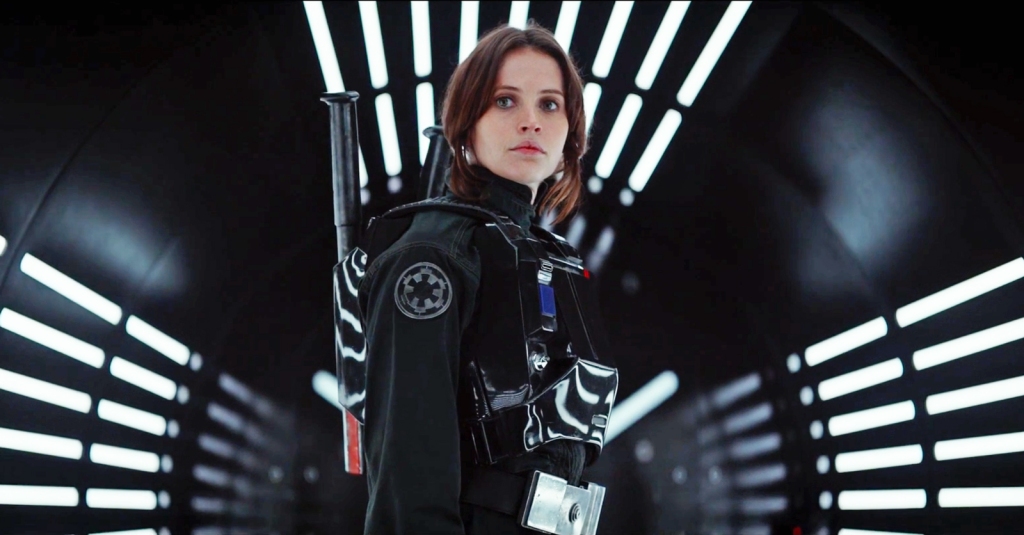 For even the most hardened sceptics, sometimes it’s enough for a film to just be fun.

The absurdity of the Death Star’s fatal structural flaw, something that should surely have come up in quality control tests prior to its destruction in Episode IV, has for a long time been an affectionate gag amongst Star Wars fans. Here, it’s taken very seriously, as third-time feature Director Gareth Edwards spends an entire movie justifying the embarrassing oversight and constantly reminding you that Rogue One: A Star Wars Story, despite not qualifying as an Episode, did indeed happen a long time ago in a galaxy far, far away.

The events of Rogue One start out very much like A New Hope, and for that matter, The Force Awakens. A young Jyn Erso (Felicity Jones), torn apart from her family, witnesses the destruction of her home by the Empire’s Orson Krennic (Australia’s Ben Mendelsohn), intent on utilizing the engineering skills of her father (Mads Mikkelsen). Having grown up, she’s captured by the Rebel Alliance, represented here by Intelligence Officer Cassian Andor (Diego Luna), who wants to find out what her father is building.

From there, they meet a rag-tag group of misfits who, in no surprise to fans of the series, must go to any lengths to retrieve the plans for the Empire’s greatest weapon.

At its best when focused on its eclectic ensemble, paint-by-numbers backstories for Jyn and Cassian replete with fleeting allusions to troubled pasts matter little when faced with Firefly veteran Alan Tudyk as the indelibly-literal robot K-2SO, boasting one of the funniest and least forgettable character introductions in the whole saga. Donnie Yen (Ip Man) almost steals the show as the blind guardian of the remaining kyber crystals, himself not a Jedi but obsessed with the ways of the Force. They navigate a plot reliant in no small part on the charisma of its leads, which at one point is only one step shy of someone screaming out ‘it was the nursery rhyme he told his daughter!”

Thankfully, there’s never a Guardians of the Galaxy-esque group shot in Rogue One to belabour the unlikeliness of their pairings, with the first stand-alone Star Wars epic noticeably more akin to a traditional war film than any of its predecessors. Reminiscent of classics such as The Dirty Dozen, the innumerable raid sequences, and most memorably the final assault on an Empire archive, are as thrilling as many in the series to date. Amongst a somewhat sprawling cast, there’s never a feeling that any of the main crew are dispensable, in spite of an unfortunate regularity as to the method by which characters are inevitably dispatched, which unlike the rest of the series betrays a distinct lack of imagination.

Too regrettable, the best performers are in the film for all too few minutes. Forest Whitaker comes and goes as a dauntless fanatic shunned by the Rebel Alliance, while Mikkelsen, regardless of his palpable on-screen intensity, barely registers. Mendelsohn is the stand-out of the cast, turning churlish dialogue that would appear hammy in the hands of a lesser actor into fearful menace, matched only briefly by one fleeting appearance of a character whose long-awaited return to the screen is not unwelcome.

Only one element of this prequel of sorts trying to strenuously convince you that it’s part of the Star Wars universe, the late, great Peter Cushing, having already made an irrevocable contribution to sci-fi as we know it as Grand Moff Tarkin, appears here not once, but, ill-judgedly, several times, his CGI-rendering, as it is with one other noteworthy if inescapable addition to the proceedings, more distracting than it is nostalgia-inducing.

AT-ATs and AT-STs also make welcome re-appearances after a long absence, while the addition of one cast member from Episodes I-III gives the absolute minimum of lip-service to the prequels necessary to connect the two trilogies together.

Lacking the unbridled joy of The Force Awakens or a Director at all familiar with fantastical, blockbuster franchises, Rogue One is a much grittier if muddled story that will delight fans already enamoured with the expanded universe. The first of many scheduled stand-alone Star Wars films and nicely complementing the Skywalker saga, after Rogue One you’ll never watch A New Hope the same way again, and that’s not a bad thing.

Rogue One: A Star Wars Story is in cinemas now