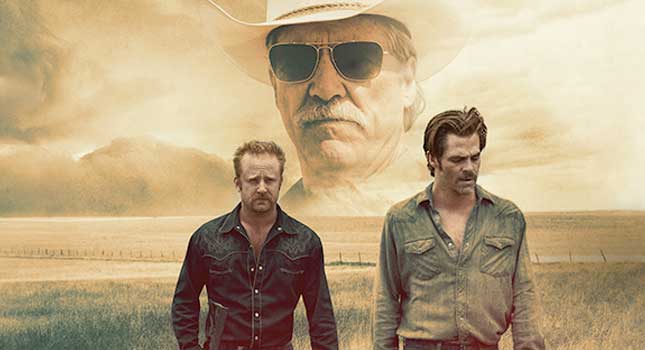 It takes a lot to outdo Jeff Bridges and Chris Pine, even in the latter’s best performance to date. Ben Foster (Inferno, 3:10 to Yuma) does just that, and he’s a sight to behold.

Essentially The Town set in west Texas, but no less compelling, bank robber brothers Toby and Tanner (Pine and Foster respectively) spend two hours on the run from local cops (Bridges and House of Cards’ Gil Birmingham), intent on raising enough funds to buy back their land amidst widespread economic misfortune and the pair’s increasing desperation.

Tanner, as with Jeremy Renner’s unforgettable outlaw, has just got out of the clink after 10 or so years and has no plans on going back, leading to more than one very tense shoot-out. From an impromptu bank robbery to some more daring outings, Foster’s maniacal live-wire even amongst an eclectic cast manages to be the most compulsive element in Director David Mackenzie’s consistently compelling thriller.

Notably more gung-ho than Toby, Pine’s somewhat more morally-conflicted Texan heralds some of the film’s lighter moments, including a darkly comic opening sequence that recommends Hell or High Water all on its own before it quickly shifts gears to heavier fare. With the prevailing economic conditions and brothers’ implicit rationale underscoring the narrative, namely the robbery of the very institutions by which they were so hard-done, the conflicting ethos driving the whole film is deployed to great effect throughout.

Shying away from over-stating its encompassing fraught dilemma or abject moralising either which way, the empathetic story instead permits a thrilling Heat-style narrative where we gradually get to know Bridges’ flawed lawman in tandem to but entirely separate from our burgeoning understanding of the brother outlaws. Bridges is reliably superb as the Officer soon set for retirement, his bristling interactions with his Native American partner further belaying the film’s focus on west Texas which is just as much an on-screen character as any of the leading men.

Containing fascinating if passing interactions with locals as both sets of companions skirt around the State, a memorable exchange with a waitress who has spent decades serving customers in the same establishment helps anchor the film in a very relatable reality as much as it’s moving story. The surprise casting of Gunsmoke’s Buck Taylor, amongst others, was clearly intended for and contributed to a very well-realised effect.

With few exceptions, there’s not too much in Hell or High Water that will take you unawares; and if the worst thing you can say about a film is that it’s about as predictable as it is powerful then it’s a story well worth telling and taking the time to see.

Hell or High Water is in cinemas from October 27