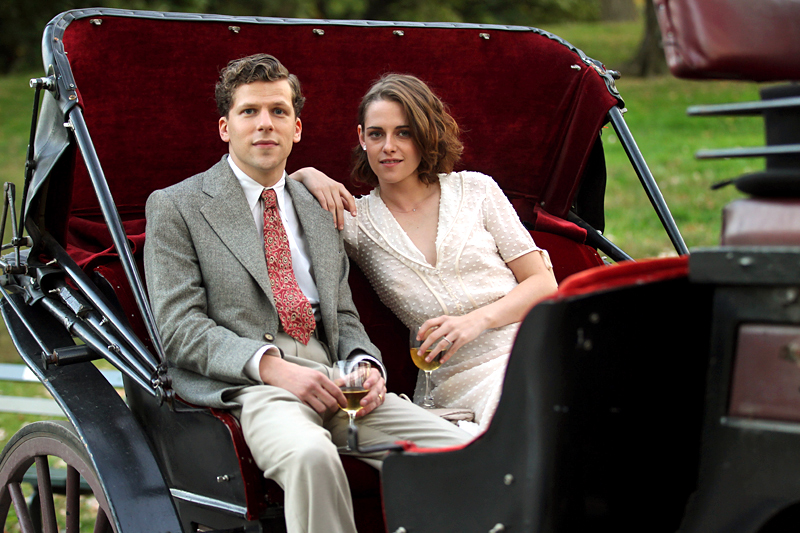 Yes, you’ve seen it all before.

Jesse Eisenberg, in a role Director Woody Allen would no doubt have played himself were he 40 years younger, moves to Hollywood in the guise of New York-native Bobby to work for his studio-heavyweight uncle Phil (Steve Carell), only to fall for Phil’s secretary Vonnie (Kristen Stewart).

The 1930’s allure of old Hollywood is no doubt charming for anyone with an aloof nostalgia for the period and Allen delivers in this regard. As fish out of water Bobby encounters the glam and glitz of classic Los Angeles and its big-screen stars, the Gatsby-esque stylings soon give way to a noticeably conventional love triangle and a storyline involving Bobby’s gangster brother which is woefully out of place and completely inconsequential to the central romance.

Gossip Girl veteran Blake Lively is a late and very rushed addition to the proceedings (also named Vonnie) as the action begins to jump between the east and west coasts.

Allen has directed like versions of this comedy and while Café Society is not unentertaining, if largely irreverent, he’s done it better in his earliest and even some of his more recent projects. The shtick here is just that bit tiring, even more so as his latest immediately follows on from the much more innovative pictures Blue Jasmine and Midnight in Paris. Steve Carell turns in an admirably good performance in his first outing with Allen, as do his co-stars, but it’s never enough to carry the tried story.

Most striking of all are the similarities to the first of now three Eisenberg/Stewart flicks Adventureland, made well before they became the stars they are now. In both features, Eisenberg’s character forsakes New York to find a new job and ends up meeting and falling for the girl at work and first love (Stewart) who, surprise surprise, is having an affair with an older, married confidant of Eisenberg’s character who takes advantage of his lack of awareness. More than one love triangle emerges as a glamorous fly-in courts Eisenberg’s favour, everything comes to a head as clandestine relationships are unveiled and a hugely consequential scene takes place in the city that never sleeps.

There’s enough to enjoy in Café Society and if you’re an Allen-fanatic you won’t be disappointed. For the uninitiated, Café Society treads well-traversed ground even for the nostalgia-tragics; don’t expect many surprises.

Café Society is in cinemas from October 20