“For $12 a month you can buy an iPhone and put this on the screen.”

The second annual SmartFone Flick Fest screened it’s top ten finalists last night at the Chauvel Cinema in Sydney’s Paddington, with Bondi’s Christopher Stollery’s (above) No Budget taking out the top prize for Best Film as well as the award for Cinematography.

A hilarious around-the-world adventure and exploration of filmmaking itself,  with a couple of very surprising star cameos No Budget, the first of the finalists to screen, was a clear audience favourite on the night.

“We spent no money on this film,” said Stollery (below), accepting his first award. “Except for coffee, that’s the only thing we paid for.” 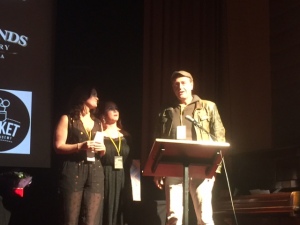 Shot on an iPhone 4s, every one of the short films entered into the Festival must be produced on a handheld device. On the Festival itself, Stollery commented, “I hope it goes from strength to strength… this really is a grassroots festival and its great to be a part of.”

Only in its second year, SF3 has already received over 600 entries and has “plans to take films on the road.” Boasting a significantly higher level of filmmaker and community participation, as well as a visible rise in the calibre of films following last year’s Festival, the packed Gala event was streamed live for the first time to followers from around the world, with finalists hailing from the US, Canada, the Czech Republic and Germany.

The People’s Choice award going to the latter’s The Weird Sisters by Berlin filmmaker Blake Worrell, a clear crowd (and personal) favourite on the night was Bubbles Don’t Lie, a novel, laugh-out-loud story about the mysterious origins of numbered-bubbles appearing above everyone’s head one morning, with Czech filmmaker Stepan Etrych taking out both Best Director and Screenplay.

The inaugural ‘Filmbreaker Award’ for best first ever film and Best Actor (well deserved) went to Surry Hills filmmaker Liam J. Phelan (above) for Don’t Give Up, a stirring short about a brother suffering from post-traumatic stress disorder. Baggage Claim (below), another Sydney film, took out Best Actress for an adaptation of an award-winning Short+Sweet play.

Real Estate, a short by Newtown filmmaker Laurence Rosier Staines, centered on three millennials macabre attempts to drive down house values in the inner city, while not receiving any awards got one of the biggest laughs at the Gala. Staging faux-kidnappings of residents to make the area ‘undesirable,’ it was only one of a number of sharp-witted ideas packed into the eclectic shorts on the night.

To check out some of the entries and for more information, visit the Festival website.