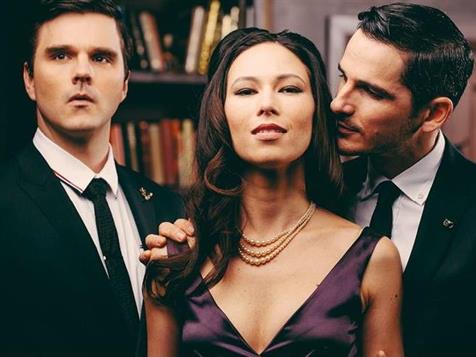 Chemistry can make or break a show – in Betrayal, it’s everything, and deployed to sublime effect.

It’s a tale as old as time – three people, established friends and lovers, outwardly in happy, committed relationships, finally forced to confront their lack of fidelity to their partners and each other. Told largely in reverse and throughout several sequences that span a decade or so, Harold Pinter’s oft-touted classic has aged well and can still hit the same notes it rang with audiences decades ago.

Ensemble’s staging of Betrayal is too the latest in a wide-ranging set of collaborations between Holding the Man veterans Guy Edmonds and Matthew Zeremes. Depicting two best friends of long-standing, the visibly familiar and affectionate if strained relations between the pair will have you believing you are watching two rogues who hark back to time immemorial, sharing a complex rapport and set of interactions befitting the familial machinations of the play.

The two, together with Betrayal’s very talented third player Ursula Mills, extract from what would appear to be an overwhelmingly dramatic and emotional premise several bales of laughter, drawing out some of the tensest scenes and confrontations not only for pronounced effect but occasionally macabre, dark and lightly-absurdist bursts of humour. One of Jerry’s (Zeremes) revelations towards the beginning of the play, exuding the character at his most nonplussed and selfish, is among the show’s highlights, as is a turning point shared between Edmonds and Mills following the recovery of a letter, its dramatic effect lightened somewhat by Edmonds facing away from the audience for a heft of the engrossing action.

The ending, if a little lacklustre, nonetheless packs a punch in the well-paced production, playing out thrillingly over nine separate scenes staged in one sitting. Each set of encounters depicting its own distinct confrontation or revelation, none of the players individually, nor the thankfully minimalist setting, distract from the group dynamic. Each aspect of the play, rather than emphasising individual contributions or performances, together with the actors output feeds into the wider picture in an accomplished ensemble piece that excitedly feeds and thrives off its player’s well-versed interactions and striking reciprocity.