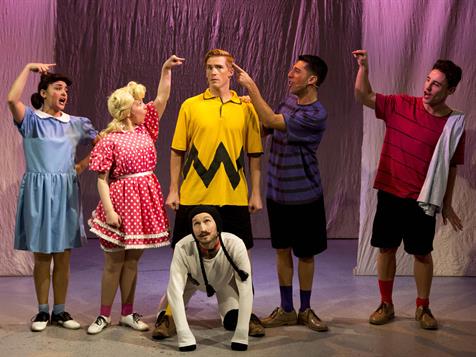 As if flipping through the pages of the iconic strip, the Hayes Theatre Company has joyously brought Charlie Brown and co to life.

Simply staged with a local cast of six, the musical’s episodic approach to Charlie’s travails and that of Linus, Lucy, Snoopy and their friends jump through the funny page’s classic features and philosophical musings, interspersing the action with a few songs and the famed Peanuts tune we know and love.

At least a cursory knowledge of Charles M. Schulz’s creation would be advisable to get the most of the musical, though kids less familiar with the material will be able to enjoy the lively tunes and performances in equal measure to their adult counterparts who won’t be able to help but smile at the production’s heavy nostalgia and palpable affection for its source material.

The best parts of the musical, scattered throughout, are the moments when it taps into the iconic imagery of the series, often choosing to rest on pastiches of Schulz’s that fans will indelibly relish. Whether its Charlie Brown sitting on a bench, Lucy fawning over Schroeder’s Beethoven-obsessed musical stylings, Linus clinging to his blanket or Snoopy taking on the Red Baron atop his hutch, the latter a thrilling mix of visual effects, music and energetic showmanship in the show’s most memorable scene, the loyalty to its source material will not leave fans disappointed.

Andy Dexterity (Snoopy, also the show’s choreographer) is the stand-out of a talented cast complete with Hayes veterans including Sheridan Harbridge (Lucy). Visibly having fun in his unusual get-up in a resolutely tongue-and-cheek performance, Dexterity vibrantly brings to life the acerbic if not always communicative canine. Laura Murphy (Sally) is the most outstandingly cartoonish of the bunch, nicely complemented by Ben Gerrard’s (Linus) and others’ more contemplative reflections on adolescent life.

The episodic approach to the material, rapid and oft-changing in tone and style, combined with the absence of any over-arching narrative may irk some theatre-goers. The rapid-fire succession of insights into the characters’ lives and growing up, faithful to a tee and to the fashion of the Peanuts creator, are just that, passing insights, some that will resonate more than others and that can each be enjoyed on their own, and like so much of the comic strip, in perpetuity.

A great deal of fun for those who read the original stories years ago, adolescents and ages in between, with You’re a Good Man, Charlie Brown Hayes have delivered another winning production.