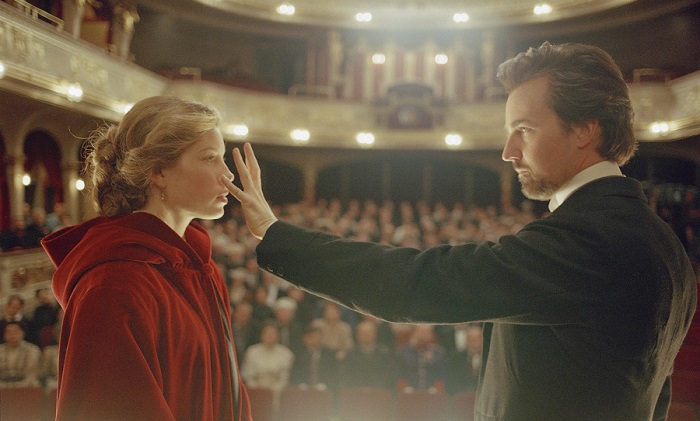 As Now You See Me 2 tricks its way into cinemas this week, FilmInk pays tribute to 2006’s The Illusionist, an under-celebrated magic movie that plays out like a true cinematic sleight of hand.

It is rare for a film to tell us exactly what it’s going to do, do it, and still leave the viewer in shock. That takes more than a good magic trick.

Note: This piece contains major plot points from The Illusionist

The Illusionist, starring Edward Norton in the title role and celebrating its tenth anniversary this year, opened merely seven weeks before being commercially eclipsed by its thematic rival, The Prestige. Both featured Victorian magicians wowing ever-growing audiences, an escalating series of illusions, and an atypical fascination with the mystical elements of magic, be it The Illusionist’s obfuscation of physics through the balancing of a sword mid-air, or the contraption gifted to The Prestige’s protagonist (Hugh Jackman) by famed inventor, Nikola Tesla (David Bowie).

Both films further intertwine through their exploration of the post-mortem, with Tesla’s machine providing a unique alternative to staging tricks with body doubles, while Norton’s magician, Eisenheim, apparently conjures up hazy apparitions of the deceased for the audience every night.

The Prestige is thrilling because its director, Christopher Nolan, manages to hint at exactly what the big twist is halfway through the film by having a character speculate as to the mechanics of the trick. On first viewing, an audience is easily misdirected with something else that at the time is wholly mind-consuming, only to be followed later on by the denouement which, having been foreshadowed, is now by no means unbelievable as realisation slowly dawns.The Illusionist achieves this and takes it one step further, with a character actually telling us explicitly what has happened in such a way that there’s no way we would believe him until the magicians pulls the wool from over our eyes. Tracking Eisenheim at the behest of the Crown Prince (Rufus Sewell), the Kingdom’s Chief Inspector (Paul Giamatti) grows increasingly concerned after he, and by extension the audience, discover in no uncertain terms that Eisenheim intends to escape with the Prince’s intended fiancée, Sophie (Jessica Biel), the illusionist’s childhood friend and lover. First attempting to prove that Eisenheim has committed fraud, the Inspector, along with the viewer, attempts to discern the origins of the magician’s illusions, only to grow increasingly suspicious of the Prince following Sophie’s sudden death.

Attending one of Eisenheim’s performances, the Inspector witnesses him conjure an apparition of Sophie, who reveals alleged details of her death. Putting two and two together after he finds gems from the Prince’s sword at the scene of the crime, the viewer easily gets caught up in the detective story alongside the Inspector who, himself a reflection of the audience’s evolving realisation, is as nonplussed as everyone else. The Inspector confronts the Prince immediately following the show, only to have the Prince protest, “You fool! He’s tricking you, he’s manipulating you.”

More than just pushing the final reveal in our faces, the Prince goes on to explain how Eisenheim did it, positing that “he had the sword at the command performance – he could have pried the stones loose then and planted them here. He’s planted everything. It’s all a trick. It’s an illusion.”

The Prince has told us exactly what happened, in such circumstances that you would be less than likely to believe him and are more than distracted from the explanation by his waving a gun in the Inspector’s face. An abusive, wholly unsympathetic drunk who beat Sophie and other lovers, the Inspector is all but ready to arrest the Prince, subsuming the casual viewer’s attention to the point that not only do they believe the Prince is capable of murder, but desperately want to see him get his comeuppance. In The Illusionist’s final moments, it is revealed that the Prince was right all along, and as foreshadowed, Eisenheim and Sophie have run away together. Better yet, we’ve been treated to a real twist ending because it didn’t come out of the blue – we were told exactly what was going to happen…we were just looking elsewhere.

More than playing a trick that The Prestige never quite pulled off, The Illusionist, released prior to Nolan’s thriller, delivers The Prestige’s hook (albeit less explicitly) to much greater effect. The Prestige begins and ends with Nolan stalwart, Michael Caine, explaining its title, namely that every magic trick, as demonstrated throughout each film, involves three parts. First, the pledge, where the magician shows you something and invites you to inspect it. Second, the turn, where the magician does or changes something that makes you want to know how they did it. And finally, the prestige, “because making something disappear isn’t enough; you have to bring it back.”

The Illusionist opens with a jump forward in time to an important scene, giving the audience a foothold into the story that they will immediately inspect and ponder throughout the film. The second element of the trick plays out throughout the bulk of the movie. Eisenheim and Sophie rekindle their love, we and the Inspector are treated to clues to what is really happening, and ultimately Eisenheim dramatically disappears in the middle of his performance. But that isn’t enough, and in the final act, we are treated to not only Eisenheim’s reappearance but his heart-warming reunification with the very un-dead Sophie. Having duped the Inspector all along, The Illusionist is so compelling because it plays out not just like a magic trick, but a great one so endearingly elegant and well-constructed that it renders the Inspector, and by extension the viewer, so blissfully unaware by the very act of letting everyone in on the prestige.

The Illusionist, more than its wily misdirection, is in every respect an accomplished film. Norton’s dead-pan, intense concentration throughout the conjuring of his mirages could have you actually believing that you are watching some 19th-century mystic at work. Giamatti and Biel are similarly compelling as two of Eisenheim’s most awestruck observers, while Sewell subsumes the role of the Viennese aristocrat with dour aplomb.

Contributing a polished and understated sophistication to the lucrative genre of magic movies – with the sequel to Now You See Me released this very week – the entire atmosphere and tone of the film envelops the audience in the 19th century romanticism that fuelled the then-burgeoning demand for magic. In The Illusionist, the viewer is Sophie, the Inspector, or anyone else who was lucky enough to get tickets to Eisenheim’s stage show; transported to a theatre in a time and place where you can’t tear your eyes away, and despite magic having experienced since then a century’s worth of healthy scepticism, The Illusionist still makes you want to believe.