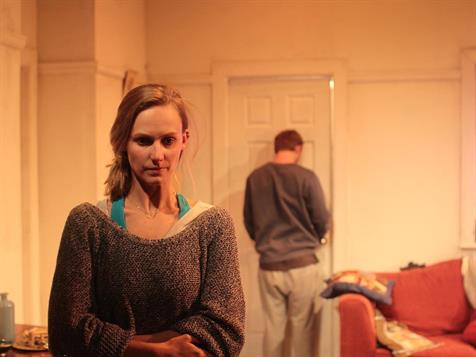 Emotions. All of the emotions.

Belleville parks its elephant in the room from the very beginning, making it evident that at some point, probably towards the end, something very, very bad is going to happen.

Everything in the play builds up towards its conclusion, piling tension-filled scenes on top of each other as each of the four emotionally-laden characters navigate a small loft in the eponymous Paris suburb. Centred on two couples, though mostly revolving around the young, married co-dependents Zack (Josh Anderson) and Abby (Taylor Ferguson who had less than a week to prepare for the role due to cast illness), the characters slowly come to terms with the secrets they’ve kept from each other and the faulty foundations of their relationship.

Tense throughout, Belleville’s restless state is only compounded by the significantly constricting apartment setting that the action envelops for almost all of the play; the short asides from the main locale providing only sparse relief from its pressure-cooker environment.

While not necessarily surprising, the ending still packs an emotional punch which is softened somewhat by a dramatic sequence in Belleville’s latter half which just as easily could have been one of its conclusory notes. From there, the characters begin to expound their thoughts and emotions in one of Belleville’s numerous expository scenes which only distract from the drama in a play that otherwise revels in the curious and largely unclear nature of Zack and Abby’s cataclysmic pairing.

Well-performed, the four talented actors enliven the emotional centre of the play, most notably Anderson as the devoted husband in a softly charming and moving performance, conversely injecting the production at the same time with some of its few humourful reprieves. Aldo Mignone’s landlord is also a stand-out, while Ferguson shines in an emotionally-gripping performance achieved in spite of the short capacity for preparation and some timing and delivery issues in the dialogue-heavy sequences.

A play that succeeds due to its cast merits. In spite of oft-sprawling dialogue, the production and story could have benefited from more of that which allowed its actors to excel – showing, not telling.