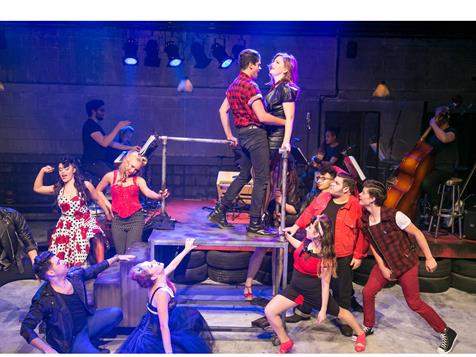 Not Grease as we know it but oh so good.

The Original Grease is based on a 2010 adaptation of the now-familiar musical’s very first stage production, before it was adopted by Broadway and further saturated for the family-friendly movie market. Recognisable if overtly different, a few of the film’s classics make way for some toe-tapping rock-n-roll numbers while many of the 1978 version’s supporting characters (Frenchie, Kenicki, Cha-Cha) play much more central roles.

Explaining the rest would ruin the surprise as amid the tunes and characters we know and love there’s a slew of unfamiliar additions which would have done just as well in any adaptation. Edgier by far than the film that introduced Olivia Newton-John to the world, The Original Grease unapologetically features many 1950s sensibilities and a number of sequences, including a fight in a park, that would never have made it into a kid-friendly version.

Relying not on a lead or two but an evidently talented ensemble cast, the group sequences are the production’s most thrilling aspect, none less so than the a cappella rendition of ‘We Go Together’. With the musical accompaniment in parts off-time and overly loud, when the whole crew meet up in one of the production’s many seamlessly choreographed numbers to knock out some tunes it makes you want to join them on the floor. Too much at times given the panoply of minor stories, some of which are only given one or two scenes to flesh themselves out, the songs and dance acts are still highly memorable and hugely fun.

Rizzo (Coral Mercer-Jones) and Patty (Matilda Moran) make the biggest impact of the (mostly) young cast, owning some of the solo numbers and two of the more challenging roles. Christian Charisiou steals the whole ‘Beauty School Dropout’ scene as the teen angel, one of a number of exemplary cast members playing second-fiddle only to the boisterous costume design, the quality of which did not falter throughout the host of characters and cast members.

Using a rig and a locker to great effect for most of the sequences, the full parameters of the theatre are nevertheless barely used, with an upstairs section only utilized for some shadowy commentary early on and a walkway through the stands adopted only for the teen angel’s laugh-out-loud entrance. Featuring a few big numbers, parts of the production had the capacity to expand throughout the theatre and could have done so instead of being confined to a smaller space on the front stage.

An adaptation that works because it combines the story and characters we grew up with and just enough innovations to keep even the most die-hard fans riveted, its quite something to learn that even with the film’s enduring popularity, Grease isn’t entirely a known entity and its engrossing to find out why.