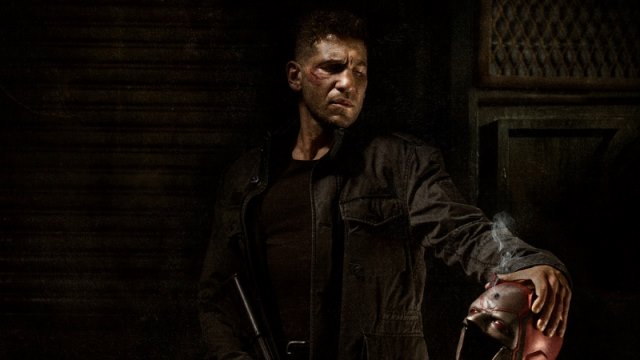 Daredevil season 2 – released in its entirety by Netflix on Friday – belongs there, and nowhere else.

Following Daredevil’s highly acclaimed first season, Charlie Cox returns as Matthew Murdock, the blind, masked vigilante – attorney by day, and The Devil of Hell’s Kitchen by night. As the series begins, he is confronted by two new players who also don’t mind taking the law into their own hands…though they do things a little differently. Neither hardened war vet, Frank Castle aka The Punisher, nor Murdoch’s ex-girlfriend/martial arts master, Elektra Natchios (Elodie Yung), mind rendering the bad guys unconscious…they just don’t want them to get up again.

Revitalising the Daredevil brand following the justly lambasted 2003 film, the TV show has similarly succeeded in giving two of the comic series’ most iconic villains/anti-heroes the calibre of adaptation and screen-time that they’ve long deserved, following more than one ill-advised outing. Allowing the scope and space for in-depth exchanges that hinge the characterisation and development of a character on more than sound-bites or one-liners, as is too often the case with many film adaptations, key characters are given time to delve into their motives and intent, with a detailed-filled night of action taking place over the course of a few episodes instead of a few minutes.

Of all the dimensions to be unpacked in Daredevil’s latest season, nothing features so strongly as the exploration of the moral dimension of Matthew’s actions, depicted explicitly and thoughtfully through a prolonged courtroom drama where our hero, confronted with an adversary, is forced to grapple with the rights and wrongs of his own vigilantism. Challenging the moral compass of its protagonist through battle with a seemingly insurmountable foe,Daredevil has gone down the path of Christopher Nolan’s Batman trilogy, with the second series drawing many less than casual allusions to the blockbusters.

Having rid the city of organised crime elements in his first outing, and maintaining an amicable if strained relationship with the police force, those inspired by Daredevil similarly take the path of vigilante justice. Emboldened by Daredevil’s disregard for the law, an unhinged gunman wreaks havoc on organised crime and anyone who gets in his way. Able to emerge only as a result of Daredevil’s actions, The Punisher challenges Daredevil’s moral self-righteousness, and – as The Joker does – vehemently denies that he is deranged, justifying his rampage and all but proclaiming, “I’m not a monster, I’m just ahead of the curve.”

Towards the later stages of the season, Daredevil reasons, as Batman did before him, to forgo his moral code in order to defeat the bad guy and safeguard the very values and way of life that he knowingly forsakes. Ninjas abound, a district attorney is not only a central figure but a key target, an assault on a hospital takes place, and the penultimate sequence includes of all things a night-time raid on an empty building site where innocent civilians are being held. Thrilling if not overtly recognisable, Daredevil explores greater facets of its vigilante’s struggle over the course of 13 episodes than The Dark Knight ever could over its two-and-a-half-hour runtime.

Reflecting the long-term planning and investment exemplified by The Marvel Cinematic Universe’s gradual build-up to The Avengers, the frequent and now more obvious tie-ins to last year’s Jessica Jones will delight fans waiting for a much anticipated crossover; inevitable in a collection of series where shrewdly-drawn storylines and adversaries mercifully and thrillingly stretch over years and into each other instead of being cut short by a perfunctory season conclusion.

As accomplished as it is, Daredevil is by no means perfect. Unlike Jessica Jones, which also underlies its key protagonist and villains with a great deal of thought, the treatment ofDaredevil’s supporting, non-heroic characters ranges from the dull to the overly distracting. When Matthew isn’t on screen, and either Foggy (Elden Henson) or Karen (Deborah Ann Woll) are running the show, the dialogue and minor storylines are neither as compelling nor emotive. Foggy’s scenes are a collection of the show’s worst moments, heralded by an actor visibly less capable than his co-stars, leading to many of the show’s crucial sequences between Matthew and his oldest friend falling flat.

Moreover, Daredevil’s Hell’s Kitchen does not embrace the modern age and technology as well as Jessica Jones’ titular private eye. Set currently, despite the frequent need for communication, the show’s characters seem to have very little use for mobile phones, which rarely appear: Matthew receives a phone message from a restaurant maître d; everyone gets their news from the paper; and for research, the crew pore over newspaper clippings instead of their browsers. The show, featuring a semi-fictionalised setting espousing the classic image of Hell’s Kitchen, could just have easily been set in a different decade, and may as well have been. Depicting its neighbourhood as at the mercy of rival gangs, and fraught with unstoppable rage and violence, today’s Hell’s Kitchen adjoins highly-frequented business and entertainment districts including Broadway, and caters widely to the upper-end of the housing market.

By no means detracting from the overall quality of the show, Daredevil’s lack of regard for its context and modern advancements in technology, while in one sense a hark-back to the original comics and iterations that made it so successful, is in this day and age needlessly distracting. Regardless, Daredevil is one of the only examples of an adaptation of a successful comic series with the breadth and wherewithal to do real justice to its subject matter which, thankfully, has again been championed by showrunners responsible for taking a chance and delivering a second thrilling season.

Daredevil: Seasons 1 & 2 and Jessica Jones are currently streaming on Netflix