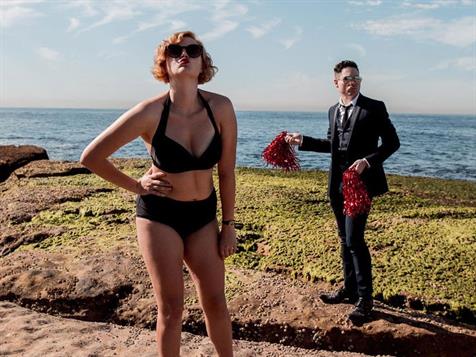 Melding multimedia with a traditional vaudeville performance, They’ve Already Won is a very modern production for the social media-savvy age.

An oft criticism of theatre that it continues to rely on storytelling tropes and methods rendered obsolete by the 21st century; this production instead revels in deploying YouTube classics, Buzzfeed posts and multiple other attributes of online, meme-obsessed culture. Two performers/narrators (Harriet Gillies and Pierce Wilcox) bemoan the state of our society, tapping into Gen Y anxieties and issues that will be more than familiar to the typical Belvoir crowd.

Most entertaining when engaging in (limited) audience interaction, there are parts of the show when the two more than capable actors bounce ideas off each other and the audience that are laugh out loud funny. An underdeveloped yet consistently entertaining part of the show, the production could have benefited from even more moments like this which yielded some of the most enjoyable aspects of the play. Acknowledging that even these elements of the production are relatively set and straightforward despite the audience participation, They’ve Already Won is self-aware throughout, endearing the show as much as the actor’s regular antics.

The production is broken up into several parts which cover social anxieties surrounding technology, lack of human interaction, the environment and a number of other matters that while generally relatable will play much better to patrons in their twenties and thirties. A scene involving a discussion of the Enmore Theatre and another featuring a Taylor Swift interlude were particularly strong, notably because the actors played off each other exceedingly well, these moments of the play proving more engaging than the few, lengthier monologues which occasionally were just that bit too long.

Despite a few technical issues and lags, the very novelty of seeing a production so focused on modern forms and critiques of human interactions, interwoven so well with technically contemporary methods of storytelling, was rewarding in itself and on its own recommends the play.

While a dance scene midway and a staging of one scene from a play that famously premiered in the same theatre were somewhat confusing and the latter misjudged, the discussions and issues explored, in addition to the constant action and physicality of the actors grabbed and held the audience’s attention throughout.

While relatable fully only to a particular demographic, They’ve Already Won is a thought-provoking, engaging and frequently fun night of theatre.