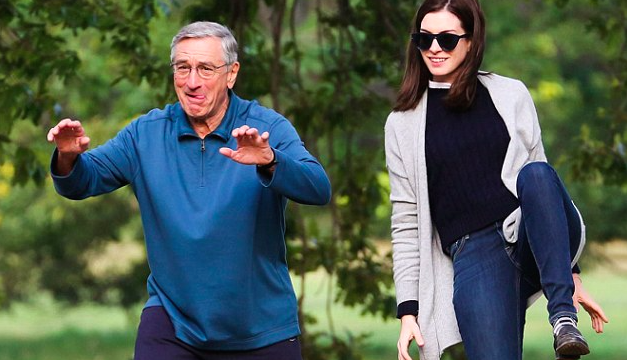 In The Intern, Robert De Niro plays Ben, a retired looking-for-fulfilment type, who is recruited as a senior intern to the younger, highly motivated dotcom wiz, Jules (Anne Hathaway).

You know Ben’s older, because he doesn’t know about Facebook and he carries around an old school briefcase that everyone thinks is vintage, but it’s just Ben’s briefcase. You know Jules is young and quirky because she rides her bike around the office. It spirals from there.

Ben is there to learn from Jules, but as it happens, there’s a lot she can learn from him too. It’s a charming idea with an interesting twist, and it’s a shame the film is simply a collection of happy moments and platitudes occasionally set to uplifting music, because it could have been so much more. There’s almost no conflict whatsoever between the protagonists, with most of the fleeting tension between Jules and Ben lasting all of 30 seconds; the filmmakers seemingly reticent to detract from the good feels.

Just as with Nancy Meyer’s previous efforts Something’s Gotta Give and It’s Complicated, there are refreshing elements to this film which will appeal to an older demographic, but unlike the director’s far superior entry starring Steve Martin and Meryl Streep, The Intern will struggle to captivate a larger cinema-going audience. Sure, there are things that appeal to the kids today, but with jokes about beards, hipsters, texting and even a reference to Jay-Z, there’s very little that is by any means endearing.

Screen legend Robert De Niro manages to more than fill his character’s shoes, conveying complex emotion in a tragically underdeveloped part. At a running time of two hours, a plot that would have been a stretch at 90 minutes doesn’t even take the time to grow its central character. Jules, on the other hand, is a comparatively more detailed character study and while it’s rewarding to see an actress of Hathaway’s talent take on the role, The Intern loses its way in some very fraught gender politics.

Jules is under a lot of pressure to give up her CEO position to someone with more experience and when issues arise with her marriage the immediate logical conclusion appears to be for her to take a step back from the company, regardless of the role she played in setting it all up and her clear, intimate knowledge of the business operations. She looks for guidance from her intern, who as well-meaning as he can be, is still the latest in a series of dudes offering her pearls of wisdom on how she’s mismanaging her life.

To compound this, Jules sees the other mums taking their kids on play-dates and to school, making her feel really bad that she’s not spending enough time with her daughter and family, which supposedly causes her husband, who previously left his marketing job so Jules could run her company, to act out. So the message for much of the film seems to be that it’s great for a woman to be CEO and provide for her family and all, until there are issues with her marriage – which by all accounts in The Intern, are a result of her actions as she has to prioritise anything else over her career ambitions, unless some guy (in this case multiple guys) tell her it’s all okay.

Parts of the film have Jules justly lamenting the ongoing prejudice against women in powerful positions or as primary breadwinners. In trying to tell this story and getting bogged down in unfortunate gender dynamics, Meyers hasn’t done a strong character, a consistently talented performer or potentially moving story, much justice.

A poorly thought-out semi-original idea leads to little more than a thorough mess and a hapless night at the cinema.

The Intern is in cinemas now.