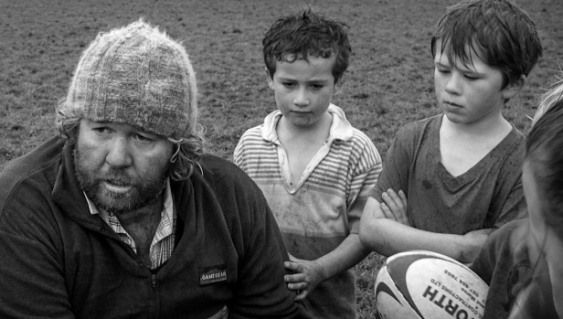 A player aptly sums up the ethos of his team and much of The Ground We Won, a documentary about a New Zealand Rugby Union team; following the players, the game and how it fits into their everyday lives.

Tapping into the very distinct and ritualistic following the game has in parts of New Zealand, for many of the players, their lives, and those of their children (who have their own teams) revolve around their upcoming games, their training and the heart-warming camaraderie seen throughout the film. Jumping between the players and their families, tending to their farms, a night at the bar and the games themselves, the film is an affectionate and often candid portrayal of a local Rugby-crazed community.

The choice to film in black and white resulted in beautifully shot rugby games and well-captured footage of foggy early New Zealand mornings, though it is also often distracting for the more intimate scenes showing the players going about their regular lives. As captivating as some of the games are, albeit seen through short-lived and fleeting footage, the rest of the film does not live up to those moments of excitement or captivation when the players are giving it everything on the field.

The decision to feature candid footage in the documentary in the place of interviews or commentary paints an intimate picture of Kiwi Rugby culture, yet doesn’t allow any sustained focus or insight into any of the players, rendering the film vivid yet markedly incomplete. The film’s most exciting moments being the games themselves and resulting tension, The Ground We Won could have benefited from more of a focus on the excellently shot local matches and the visible impact on the players, their families and the community.

The Ground We Won is screening at the Antenna Documentary Film Festival, which runs October 13 to 18 in Sydney.