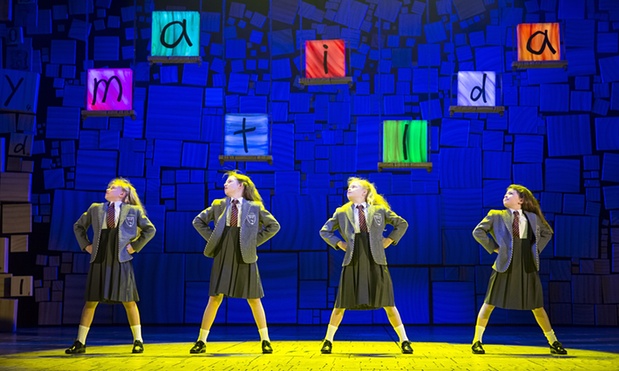 An instant classic, Matilda’s Sydney debut at the Lyric theatre promises a highly enjoyable production for parents, grandparents, revolting children and just about everyone else.

Based on Roald Dahl’s much-loved novel and bearing little resemblance to the comparatively disappointing film, Matilda The Musical is a faithful adaptation with the added storyline of a fantastical escapologist and his acrobat wife. Tampering with such sacred source material would usually draw the ire of Dahl’s die-hard fans, myself included, though composer and lyricist Tim Minchin has done the classic novel justice, while adding a few surpises just to keep it all fresh.

Bookworm and closeted genius Matilda (Sasha Rose in her debut performance, one of four cast in the role) has to contend with her parents who force her to watch lousy television and regret that she was ever born. Going to school for the first time, she meets the lovely yet timid Miss Honey (Elise McCann) and her tyrannical, eccentric and incessantly cruel principle Miss Trunchbull (James Millar).

Matilda premiered in London in 2012 to sold-out crowds – the Australian adaptation is fiercely loyal to the original production and differs markedly little from its West End run, down to the Trunchbull’s gymnastics and hammer-throwing to Amanda Thripp being picked up by her pigtails and hurled through the air. There are a few small differences, notably a missing comment from the doting parent’s ensemble in the opening song where a couple remark of their child’s school play that they “have never seen the role of tree played with so much sway,” one of the quips that drew a huge laugh from the show’s London crowd. The differences small and few, the Australian production has achieved a spectacle on par with the West End staging.

Most delightful of all is the Trunchbull; the antagonist’s delicious hyperbole and scathing wit never failing to amuse, her simple presence and first appearance on stage are enough to elicit raucous laughter. The songs themselves are straightforward, catchy and engrossing. ‘Naughty’ and ‘Bruce’ are stand-outs, the latter involving the infamous chocolate-cake consuming Bruce Bogtrotter, while ‘The Smell of Rebellion’ allows the Trunchbull a few moments to craft a hilarious, ironic and pseudo-inspirational ballad about a world with no children.

‘When I grow up’ is the production’s bitter-sweet melody, sung by the ensemble of schoolchildren about all the things they will get to do when they have grown up; a song which will immediately resonate with anyone above the age of three. ‘Revolting Children,’ along with other numbers are some of the best songs written for a group of young performers since ‘Food, Glorious Food,’ and along with Billy Elliot and Annie a welcome entry point for emerging young talent within the industry.

So much more than an excellent excuse for a bunch of child-actors to get time off school, this high achievement in 21st century musical theatre will delight fans of the book and thrill theatre-goers of all ages.

Matilda the Musical is currently playing at Sydney’s Lyric Theatre