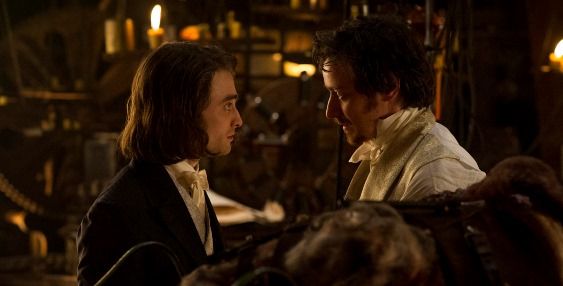 What can we expect from the latest adaptation of Mary Shelley’s classic?

Playing to type as an unhinged professor, the first full-length trailer for James McAvoy’s turn as the obsessive Dr Frankenstein was released yesterday, with Daniel Radcliffe in tow as assistant Igor.

The latest in many, many adaptations of the classic Mary Shelley story, which came about because Lord Byron casually suggested that he and a few friends have a go at writing some ghost stories, remains one of the quintessential go-tos for horror-obsessed directors and film fans. Entering the popular consciousness with Boris Karloff’s famous portrayal of Frankenstein’s monster, the novel has spawned any number of adaptations, including Mel Brooks’ Young Frankenstein starring Gene Wilder in the title role and Marty Feldman as the irrepressible Igor.

Cult hit The Rocky Horror Picture Show, featuring Dr Frank N Furter’s mission to create a human being from dead matter, also drew directly from Shelley’s novel, both in turn influenced by the Prometheus myth which also served as the inspiration for Ridley Scott’s Alien series.

Having seemingly taken stylistic inspiration from Guy Ritchie’s Sherlock Holmes double, Victor Frankenstein takes place in Victorian era London and will have any number of explosions, action sequences and a title character determined not to be stuck in a science lab.

Radcliffe distances himself even further from Harry Potter by playing against type as the relatively timid assistant, the latest in a series of films including The Woman in Black and Horns, which showcase Radcliffe’s ready talent as an actor beyond playing the bespectacled boy-wizard.

In what looks like a thrilling, CGI-laden take on the series, Victor Frankenstein is set for release on November 26.