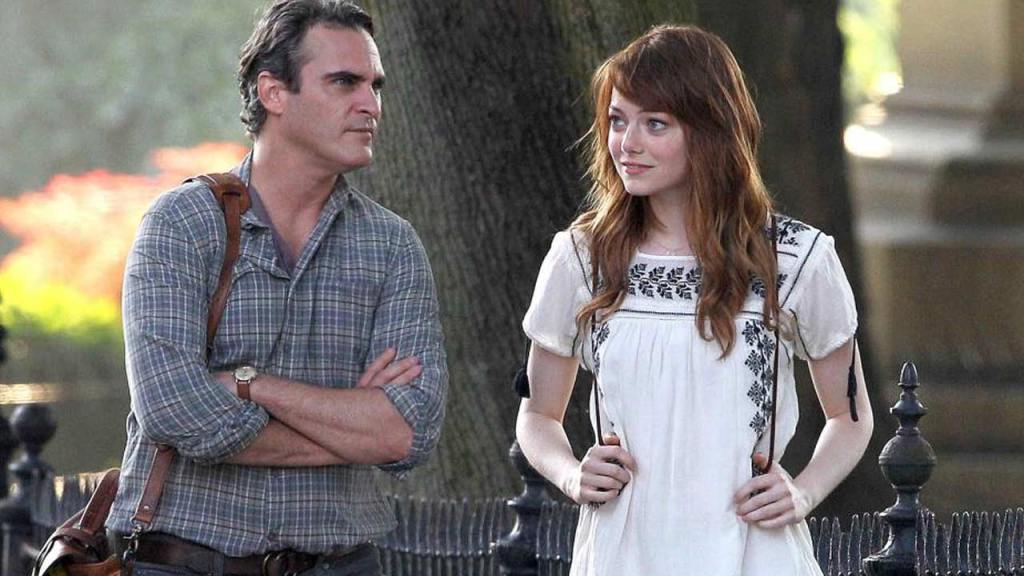 Woody Allen continues his love-affair with Dostoyevsky in the 2015 entry from the multi-talented creator who reliably churns out one feature every calendar year.

This time, Allen’s muse is Emma Stone, well-cast as the deft college student who quickly develops a crush on her middle-aged, boozing, aggrandized, self-destructive philosophy professor, played with aplomb by Joaquin Phoenix.

Together they wander around campus spouting quips of wisdom which without the wholly appropriate setting could otherwise be dismissed as droll exposition. Not content with his cosy job, attention from his prize student or affair with a married faculty member (Parker Posey), the professor comes across a man whom he summarily decides is a bad human being, beginning to wonder what it would be like to kill him.

Not the first time Allen has toyed with themes taken all too openly from the Russian author’s famed Crime and Punishment, his protagonist theorizes if and when it is moral to take a life and whether the net benefit to society and his own sense of self would make it all worthwhile. Situating the comedy-drama in a faculty and philosophy department, Allen’s latest also features casual allusions to Hitchcock’s Rope, which likewise revolved around the philosophical musings of its protagonists/antagonists, however you want to look at it.

With his professor dreaming of committing the perfect crime, Irrational Man draws much more direct allusions to Hitchcock’s similarly-themed Dial M for Murder as the plot progresses and things begin to unravel. The conflation of two very distinct and normally un-relatable stories, namely a college student falling for her professor and that of a cold-blooded murder (handled with adroit humour) would normally be treacherous ground for any director, but veteran Allen handles it masterfully, creating the latest in a series of comedies/dramas/film-musings uniquely attuned to the director’s distinct sensibilities.

The ending itself an indirect reference to Allen’s largely under-appreciated Matchpoint, Irrational Man’s conclusion is abrupt, tense, sorrowfully tragic and strangely satisfying all at once, an unusual conflation of emotions and reactions we have come to expect from a brilliant filmmaker who has again delivered, and is thankfully, now well into his late-70’s, still making movies.

Irrational Man is in cinemas from August 20