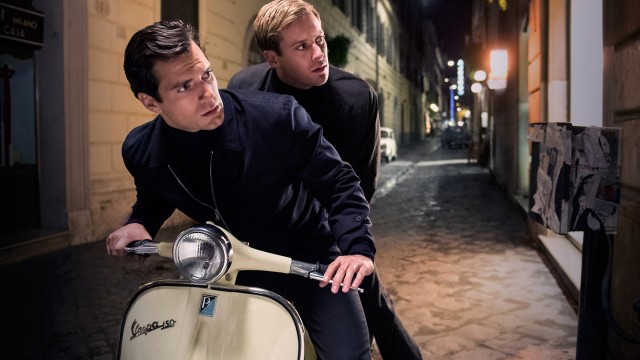 The latest popular ’60s TV show to get a modern remake, director Guy Ritchie has emerged from a series of awful missteps with a glitzy, stylish, action-filled adaptation of The Man from U.N.C.L.E.

Forced to team up with Solo and Gaby (though it’s not really explained why) is the KGB’s top spy Illya Kuryakin (Armie Hammer), together taking on the organisation’s ignoble leader Victoria (Australian actress Elizabeth Debicki).

Cavill (famous for playing Charles Brandon in The Tudors series) is by far and above the stand-out from U.N.C.L.E, playing a hilariously suave, impeccably-dressed caricature of even the most outlandish of spies. Putting even some of Roger Moore’s most campish moments to shame, Cavill is calm and collected even while being strapped to a chair and tortured, fainting from a toxin laced in one of the many, many drinks he consumes throughout the film, or outsmarting any number of goonish adversaries.

Fashion-sensitive, well-spoken and always immaculately groomed, Cavill nails the self-aggrandised, excessively-confident super-spy lampooned earlier this year in Kingsman: The Secret Service and captured so well in cartoon series Archer, both of which Cavill probably spent hours “researching” in preparation for the role.

Together with Hammer, the two have a marvellous Spy vs Spy dynamic which Ritchie could have spent just that little bit more time exploiting, rather than focusing on their individual story strands.

The most entertaining scenes feature the two playing off each other, including a notable heist sequence where Solo saves Kuryakin from near-certain death, stopping only for a moment to crack open a bottle of wine.

Relative newcomer Vikander has undeniable potential to be a major player in Hollywood – showing off some of her action/comedy chops alongside the dysfunctional duo. Following U.N.C.L.E., Vikander is set to star in a new Bourne film with a returning Matt Damon. Given her performances thus far, she might just have her pick of projects before long.

While this picture hosts some of Ritchie’s reliably good action set-pieces, it also features some of the director’s recurring foibles. The accents are all over the place, the plot doesn’t always entirely make sense and some of the cuts are just way too fast to really understand or appreciate everything that is going on.

This matters less with Ritchie’s latest and best effort in years – an irreverent, consistently humourful two hours of spy-mastery. The action is fun, the performances are on target and for the many who want (but will probably never get) a live-action Archer, Cavill does not disappoint.