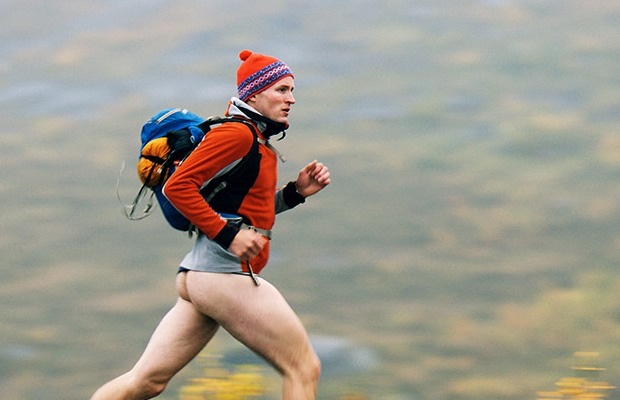 The second feature from Norwegian star/writer/director, Ole Giaever, Out of Nature chronicles the weekend of frustrated officer-worker/family man, Martin (Ole Giaever), as he embarks on a solo mountain hike.

Told through the narration of his inner ramblings, Martin’s stream of consciousness battles with his lost sense of youth and freedom; the trappings of his current marriage (he wonders at times what it would be like if his wife died); and over the issue of what he’d do if he were free to pursue his desires.

Forced to confront his yearnings in a cabin later on in the film where he meets some younger travellers, most of the film is centred on Martin’s hike and the Norwegian wilderness. Listening to ‘Forever Young’ as he runs, literally getting stuck in the mud, and in the film’s penultimate moments actually becoming one with nature, the reliance on overt symbolism doesn’t detract from a good, relatable narrative, even if you aren’t a 30-something suit with Martin’s particular grievances.

Lamenting on his lot, this almost one-man show is packaged as a comedy, though its moments of wry humour are few. Martin’s internal dialogue and struggle, at times giving way to humour, is engaging enough without the comedic moments interspersed throughout.

Short at eighty minutes, there are not enough real opportunities to flesh out the meaningful and entertaining encounters he has with his wife, son and some few other characters he meets along the way. The ending is affectionate yet typically ambiguous, as is Martin’s future.

An entertaining film that would have been unremarkable if not for Giaever’s frank exploration of middle-class anxiety and sexual frustration, Out of Nature and its protagonist, while not by any means revelatory, are both warmly empathetic and thoroughly charming.

Out of Nature screened as part of the Scandinavian Film Festival