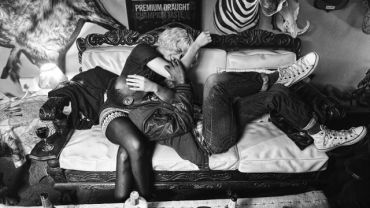 “I hate Joburg (Johannesburg), it was more an ode to my friends, to where I was from, nothing more nothing less.”

FIlmInk sat down with South African writer/director Sibs Shongwe-La Mer to discuss his new film Necktie Youth which is premiering at the Sydney Film Festival this week. Fresh off a plane from his hometown of Johannesburg, it was Shongwe-La Mer’s first time in Australia, sharing with us his views on the film and cinema generally. “I think South African cinema is kind of very generic and shit, quite a statement to make. I think that we need to reinvestigate our scenario and reinvestigate ourselves so we can make good pictures. I think South African movies need to breathe.”

Set in contemporary Johannesburg, a young woman live-streams her suicide to ten million viewers. Necktie Youth follows her friends, who attempt to come up with reasons for what happened while going about their lives. All the characters’ stories gradually connect, as they experience drugs, sex and race relations in post-apartheid South Africa.

Jabz (Bonko Cosmo Khoza) wanders the city getting high with his friend September (Shongwe-La Mer), while Tanya (Colleen Balchin) and others navigate their love lives and family relationships. They all reflect on their increasing feelings of isolation, telling each other that “people don’t really pay attention to what’s happening next door.” September tries to manage Jabz’s drug abuse, while Jabz, struggling with the recent suicide, develops a relationship with two beautiful bikini-clad sisters.

Shongwe-La Mer explained how much of the film’s inspiration was drawn from his own personal experiences, including the suicide of his girlfriend. “Everything is personal, I think that’s the best, you need to take the heart and just throw it out there,” said Shongwe La-Mer, explaining his motivation for diving into the project.

“I grew up in a society that was post-Apartheid… but at the same time was tough in terms of the alienation… cinema was really tough for me in the sense of being, I never saw anything that made sense… it was more kind of self-analytical and trying to discover who am I, what is this consciousness, what is this world in the new South Africa. I was watching movies that just didn’t speak to me.”

Evoking memories of Crash (2006) with its multi-character focus and racial themes, Necktie Youthwill also resonate with Skins fans, with both works chronicling a group of friends suffering the trappings of impending adulthood. As much about the city as it is about despair, the characters long for a livelier, happier Johannesburg instead of their bland cityscape, which only intensifies their feelings of alienation and loneliness. Questioning why their friend killed herself, some look to the internet and the forum where millions could sit remotely and watch her death.

The ending is not unexpected, but it’s as shocking as the film’s opening. Shot in black and white with the only moments of colour being flashbacks of the deceased, the film is a confronting portrait of troubled youth and modern day South Africa.

“I chose to make the film in black and white just as a romantic inspiration for the new South African consciousness,” explained Shongwe-La Mer. “I wanted to depart from the ideal of contemporary African cinema.”

One character in the film commented that “growing up is traumatic sometimes.” It’s an understatement, and Necktie Youth, a highlight of this year’s festival, powerfully depicts a group of young people, united in friendship after decades of separation, still struggling with being alone.

Necktie Youth is currently screening at the Sydney Film Festival