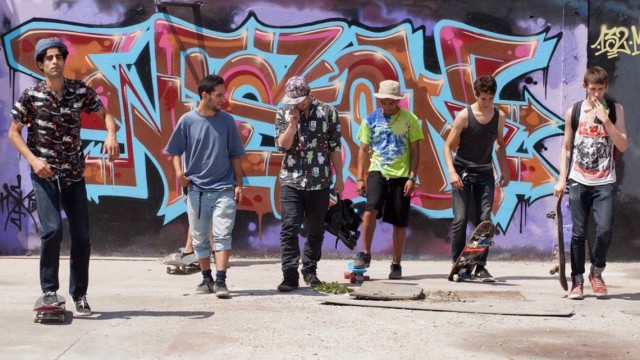 “He’s a peacock who drags his little ass through Paris.”

So a mother unflatteringly teases her son Math (Lukas Ionesco), a teenage escort for older men, before proceeding to mount him and demand affection.

Larry Clark’s The Smell of Us is a visually confronting, highly-graphic portrait of a group of French teens obsessed with sex, skateboards, drugs and sex. One friend follows the crew around, capturing wanton destruction on his phone as they torch cars, trash apartments, ruminate on life, skate and get stoned in modern-day Paris. The film’s diverse and varied soundtrack is used to great effect, initially as an uplifting score, later providing the piercing backdrop to many of the disquieting and very striking sequences.

Sparing little to the imagination, Clark’s latest showcases numerous, lengthy visual explorations of Math’s and his friend’s sexual encounters with each other as well as older men and women. Capturing some of the film in a documentary style, we witness Math’s interactions with fetish-obsessed clients, characters urinating in public and a particularly harsh scene where an old man, having spent the night with Math, wakes up covered in crayon to find his apartment trashed by Math’s friends.

Jumping between places, people and a slew of willing and fleeting sex-obsessed characters, The Smell of Us never spends the time developing any one relationship, leaving an awkward pastiche of any number of troubled teens.

Many films have trodden this ground before, perhaps most famously Jon Voight’s Midnight Cowboy which went on to win Best Picture. The Smell of Uslacks Midnight Cowboy’s emotional depth and that of others that preceded it, a film which is in all senses visually confronting but regularly substitutes meaningful interactions between characters for shock-value. Attempting to be raw and having an impact, Clark neglects the grounding for his characters, labouring his emphasis on visuals and graphic sex as an ill-advised means of evolving both the various teenagers and the group as a whole.

Screening as part of this year’s Sydney Film Festival, The Smell of Us lags behind a number of other festival entries focused on affected youth, including Necktie Youth, an outstanding South African drama that never relies on confronting moments to draw its engaging characters. Unlike The Smell of Us,Necktie Youth spreads its shock-value throughout its run time, instead developing the troubled teenagers; the film’s few shocking moments rendering themselves just that by being few and far in between rather than constantly in your face.

Graphic and purposefully discomforting, The Smell of Us is an engaging, ill-thought hodgepodge of a very distinct sub-set of teen life in Paris and certainly one of the most confronting films screening at this year’s festival.