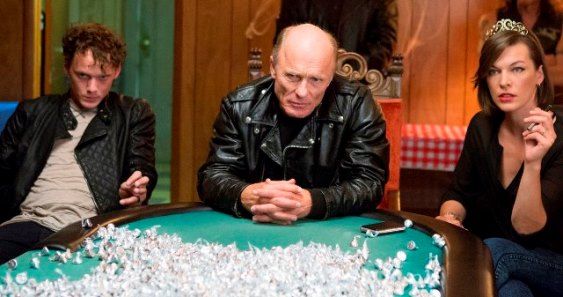 A top cast can’t save a bad idea. Here’s the proof.

Director Michael Almereyda (Hamlet, Nadja) transplants Cymbeline, one of Shakespeare’s lesser-known and least popular plays, onto a modern day war between a bikie gang, led by the play’s titular character (a very surly Ed Harris) and the local police force. Cymbeline’s daughter Imogen (Fifty Shade’s Dakota Johnson), betrothed to her step-brother (a sadly under-utilised Anton Yelchin) falls for her father’s protégé Posthumus (Penn Badgley). Iachimo (Ethan Hawke) enters as a rival, while Milla Jovovich and John Leguizamo round out a phenomenal cast in a wasted opportunity.

The few redeeming features of this production are that the characters tell so much of the story through action and voice-overs, rather than relying on the text’s long soliloquies for exposition. So many modern takes on the Bard struggle with new technologies and forms of communication – to think Romeo and Juliet could have lived happily ever after if they had just texted each other.Anarchy, for all its flaws integrates every-day advancements in science well, with the characters and drama making frequent use of iPhones and iPads.

Cymbeline’s familiar Elizabethan tropes do not translate well to a modern context, nor do the constant references to ‘Caesar’ or ‘Romans.’

The third act deaths, mistaken identity and neat tying of everything together at the end through a bunch of welcome coincidences are deliriously awkward and do not serve the film, which could have benefited from some tampering with the source material as modern adaptations of Shakespeare are want to do. Try as they might, a stellar cast which deliver their lines with conviction cannot overcome a flawed plan and ill-thought execution.