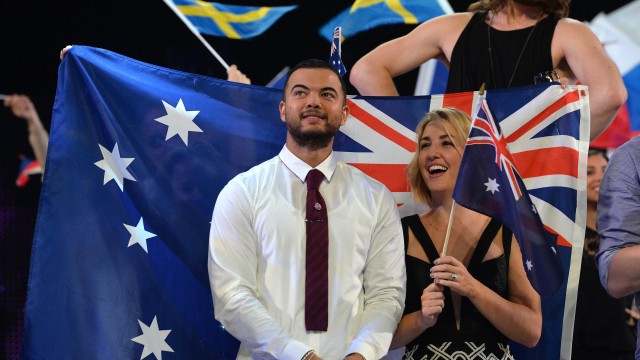 “Nothing says Eurovision like a man playing a piano that’s on fire.”

Veteran commentators Julia Zemiro and Sam Pang again brought their blithest of wits to a night of extravagance and indulgence, the kind you only get at a Eurovision Grand Final.

Austria were no exception; last year’s winning country returned with a group that must have had some measure of success as a Kings of Leon cover band, setting on fire a piano before a stunned audience of European and Australian viewers. Unable to top Austria’s Conchita Wurst, they went home with zero points, the only country aside from Germany to leave without any Eurovision love.

Sweden’s Mans Zelmerlow took out the top prize with Heroes, the type of upbeat, aspirational power ballad that allowed Sweden to win the comp back in 2012 with the aptly named Euphoria. Sweden are no stranger to Eurovision glory – ABBA won back in 1974 with the then newly-minted ‘Waterloo.’

A close second was Russia’s Polina Gagarina with A Million Voices. Slightly catchier, it was not nearly as charming as Mans; visibly ecstatic when he got up to sing the winning number at the end of the night, having only minutes before pulled a Tom Cruise – jumping up and down on his couch when it was announced Sweden winning was a statistical certainty. Sweden and Russia traded places between first and second for much of the night, with Sweden becoming the clear voter-leader when it came time to count the last few countries.

Don’t be surprised when you see the Australian flag waving in front of the winners – Guy and the team were sitting right in front of Mans, the one-off Australian entry popular amongst both the crowd and voters. For us watching at home, there was nothing like seeing Australia perform at Eurovision, and perform well. It was perhaps only topped by Lee Lin Chin reading out Australia’s votes during the tally.

Australia managed to place in the top five behind Italy and Belgium; in spite of this being our first time in the comp, we came away with a whopping 196 points. Three quarters of the participating countries gave votes to Australia, with hosts Austria and winners Sweden both granting Guy the maximum 12 points. We in turn gave our 12 points to Sweden. Denmark, Switzerland, Hungary, The Netherlands and the UK were amongst the countries to place Australian within their top three.

Wind machines and pillars of fire were aplenty this year, with the requisite speedy costume changes in no short supply. What stood out was a performance from a country on the other side of the world, which had never competed in Eurovision, with a performer barely anyone in Europe had ever heard of, which managed to beat out dozens of European nations to place up there with the winners.

Whether we go back to Eurovision or not, Australia can be proud.