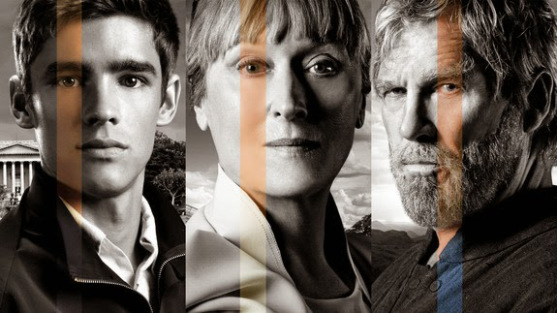 In a black and white world where everything is neat and perfect and there are no wars or bickering (it’s on an island in the sky to really drive the point home) Jonas (Brenton Thwaites) lives with his assigned family, plays with his friends, and takes his daily injections. Upon graduation, while his best mate is designated a drone pilot (an increasingly common theme nowadays), Jonas, due to his ‘special abilities,’ is named the ‘Receiver of Memories.’

How to explain this? Jeff Bridges has a go, telling our young friend that as he is the Receiver, Bridges is the Giver, charged with transferring memories of the old order so they are kept alive and can be used to better advise the floaty island’s governors (Meryl Streep). Jonas begins to absorb memories, some beautiful, some horrific, all very colourful.

Think ‘Pleasantville’ meets ‘The Machine Stops’ or ‘Justice,’ which for those playing at home was an early episode of ‘Star Trek: The Next Generation’ where the crew make contact with a highly sterilized, efficiently run, introverted conformist collective, unused to foreign influence and ideas.

Jeff Bridges and Meryl Streep make otherwise laughable dialogue authentic and emotive, while the young stars, none of whom are too bad, will certainly be given roles in future adaptations of thematically similar yet aesthetically distinct young adult fiction.

For the T-Swizzle fans out there, myself included, Taylor’s cameo, one of the great selling points of the movie, was mercilessly short. Hopefully this means she’s working hard on the impending release of album #5 ‘1989’ and just couldn’t spare the time to hang out on set with Jeff Bridges.

The concepts aren’t new but the execution is worthy, parents taking their kids along will enjoy this more than some of the other tween schlock. If you’re looking for a high-concept, interesting sci-fi about the human condition and literally breaking boundaries, you’ll enjoy this, but go see Oblivion.