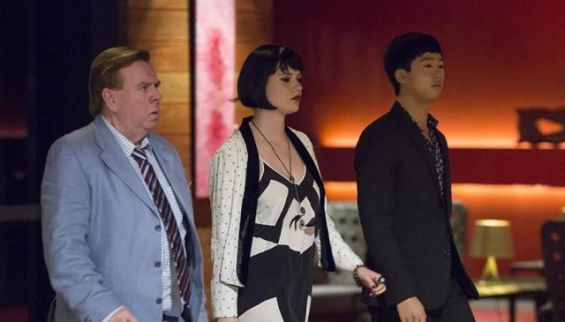 Having been thrown out of school, he meets ‘The Professor’ (Timothy Spall) when his soon to be tutor turns up at his uncle’s chess club and takes all the players for fools in Sucker’s most entertaining scene, to which the rest of the film never lives up.

Soon he joins The Professor and his daughter Sarah (Lily Sullivan) on the road, pulling nickel and dime jobs, some entertaining but nothing as creative or fulfilling as the tricks pulled by both Lawrence and The Professor in the film’s opening sequences.

The latest in a long line of con films, Sucker, like this year’s Focus, just can’t decide what it wants to be; its enjoyable confidence machinations often playing second-fiddle to a less than interesting love story. Flip-flopping in style and tone throughout the film, there is a completely incongruous scene where the characters take us on a visual journey of card tricks in centuries past, while the film’s opening and closing monologues, a technique also used in Inside Man, were an ill-advised tool much better integrated into Spike Lee’s heist thriller.

Timothy Spall delivers a satisfying if ill-conceived performance. His con-man is gruff and mysterious but barely charismatic, holding us by sheer virtue of his competence as an actor who along with Jacek Koman as Sucker’s villain come off the best from this flick.

The potential foreshadowed in the film’s opening moments not panning out, Sucker errs by not spending enough screen-time devising and carrying off creative cons; instead, it invests too much in sub-stories that are never fleshed out, nor as engrossing as the cons these promising characters could have pulled off.